Was Baltimore TV News edit, 'Kill a Cop,' an error?

Was Baltimore TV News edit ‘Kill a Cop’ an error? 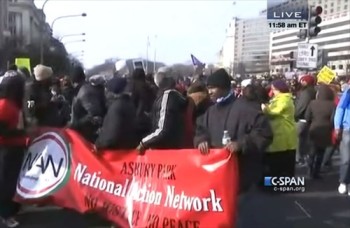 A screenshot from the National 'Justice for All' March in DC this month (Credit: CSPAN)

After a protester complained, Baltimore TV news station Fox’s WBFF, admitted that it mis-edited a video of police protesters at the National “Justice for All” March in Washington, D.C., so that it sounded like they were chanting “kill a cop.”

It was apparently a WBFF reporter, unseen in the video clip of the editing fail, who claimed the protesters chanted, “We won’t stop, we can’t stop, so kill a cop.”

The protesters were actually chanting, “We won’t stop. We can’t stop. Til killer cops are in cell blocks,” according to the protester who complained about video footage of the protests.

See below the video clip.

The station, Fox 45 WBFF, owned up to the editing error in both an on air and a web apology, claiming it was an “honest misunderstanding of what the protesters were saying.”

When interviewed by WBFF about the error, Jones commented on the editing failure, “How could that be a mistake?”

“Once you play that whole thing, you would know that that’s not something that was being said,” Jones said. “You would have to be an idiot.”

WBFF published an apology on its website and said it unpublished the original story wrongly claiming the protesters chanted “kill a cop.”

iMediaEthics wrote to news director Mike Tomko who said by e-mail, “We apologized on all digital platforms and the apology aired in every hour of our newscasts.”

He didn’t respond to our questions asking how the error occurred and how many complaints the station received.

“Fox45 is apologizing for an error made on Fox45 News at Ten last night. We aired a clip from a protest in Washington, DC where we reported protesters were chanting “kill a cop”. We received a phone call from Tawanda Jones, who is in the video, who informed us that the chant was actually “We won’t stop….We can’t stop…. ’til killer cops…. are in cell blocks”. We here at Fox45 work hard every day to earn your trust and bring you fair and comprehensive news from around the country. Although last night’s report reflected an honest misunderstanding of what the protesters were saying, we apologize for the error. We have deleted the story on our webpage and we offered to have Ms. Jones on Fox45 News at 5:00 tonight for a live interview. We had a constructive conversation with her and she accepted our invitation for a sit down interview.”

Was Baltimore TV News edit ‘Kill a Cop’ an error?