Was it OK for NYTimes to Say Ethicist Question Wasn’t from Petraeus Biographer’s’ Husband? 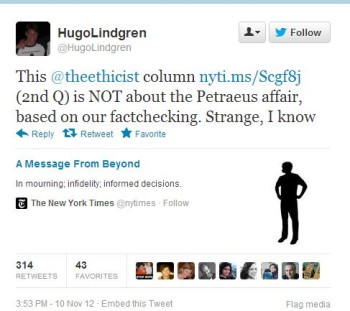 The unsigned letter, published July 13, asked Klosterman if the letter writer should “acknowledge” his wife’s “affair with a government executive” whose “role is to manage a project whose progress is seen worldwide as a demonstration of American leadership.”  The letter notes:

“I have watched the affair intensify over the last year, and I have also benefited from his generosity. He is engaged in work that I am passionate about and is absolutely the right person for the job. I strongly feel that exposing the affair will create a major distraction that would adversely impact the success of an important effort. “

(Klosterman recommended the writer not “expose the way in any high-profile way” since the other man apparently wasn’t “promoting some (contextually hypocritical) family-values platform.”  He also suggested the letter writer directly discuss the affair with his wife and ask for a separation.)

After the Times‘ July letter had recirculated in context with Petraeus’ resignation and affair, Times magazine editor Hugo Lindgren had tweeted Nov. 10:

“This @theethicist column http://nyti.ms/Scgf8j  (2nd Q) is NOT about the Petraeus affair, based on our factchecking. Strange, I know”

Later in a tweet responding to a question about that, Lindgren explained the letter writer “didn’t withhold [his name] from us, just asked that we not publish it.”

Sullivan’s Nov. 13 blogpost addressed concerns that the New York Times could have broken the writer’s trust in identifying that it wasn’t Broadwell’s husband.  She quoted Lindgren as explaining he tweeted the information  in order to “provide accurate information” and in response to “a great deal of speculation.”
Sullivan noted that:

“There are competing journalistic values here. Accuracy is important. So is confidentiality.”

Ultimately, she noted “it’s a close call” but the Times didn’t violate confidentiality in its effort “to quell a rumor for the sake of accuracy.”

In his own post about the issue, “I Lived a CIA Conspiracy Theory,” Klosterman called the speculation “totally bizarre and stupidly predictable.” Klosterman wrote:

“It’s important to remember that there is no evidence whatsoever that this was the case. None. It is 100 percent conjecture. The generic details in the letter fit the circumstances of the affair, and — because the writer is so adamant about the government executive’s import — it does seem like it could feasibly apply to a man of Petraeus’s stature…Nobody claimed to have proof of anything. The only problem is that rumors are now reported with the same tone and structure as hard news, and modern readers (no matter what they claim) have been trained to consume gossip and fact in the exact same way.”

He noted that he “was not involved in that process” of confirming Broadwell’s husband wasn’t the letter writer, and that all he knows is “the guy’s e-mail address” and “what he says his name is.”

“I don’t know what he looks like or to whom he’s married,” Klosterman wrote.

iMediaEthics has written to Lindgren asking if he or the Times would have addressed the speculation had, hypothetically, Broadwell’s husband been behind the letter. We’ll update with any response.

Was it OK for NYTimes to Say Ethicist Question Wasn’t from Petraeus Biographer’s’ Husband?