Washington Post Corrects to Add Attribution, 'Article Should Have Credited' 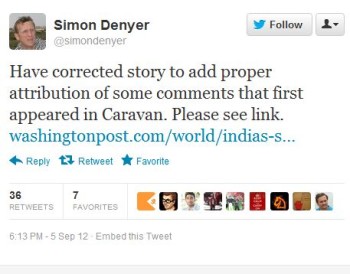 The Washington Post corrected an article that used without attribution quoted information from an India-based magazine The Caravan.

The Sept. 4 article, “India’s ‘Silent’ Prime Minister Becomes a Tragic Figure,” carries a correction reading that the article originally “failed to credit The Caravan, an Indian magazine, for two statements that it originally published in 2011.” The Caravan identifies itself as “a journal of politics & culture.”

According to the Sept. 5 correction, the “two statements” were attributed to former media adviser Sanjaya Baru and political historian Ramachandra Guha, when the pair really said the comments to the Caravan. The correction explains:

“While both men told The Post that the assertions could accurately be attributed to them, the article should have credited the Caravan when it used or paraphrased the remarks.”

According to Bhaskar, one of the two quoted, Baru, claimed on Facebook that the Post’s reporter Simon Denyer “quotes me in WashPo without talking to me. He has merely rehashed what I told Caravan last year.”  First Post said Denyer defended the article’s quotes, and emailed an explanation for the quotes.  According to that email, Denyer said that with respect to Baru’s quote, Denyer contacted Baru and “raised the Caravan quotes which I thought were lovely and asked him if he could freshen them up.”  The email goes on to say that Baru said Denyer “could use the quotes” and that the two “chatted” by phone.

The office of India’s prime minister, Manmohan Singh, claimed the Washington Post’s article was “unethical and unprofessional,” Bhaskar reported.   The office’s communication adviser, Pankaj Pachauri, is quoted as sending a letter to the Post‘s Denyer that reads in part: “Despite all lines of conversations open, you never got in touch with us for our side of the story….This story thus becomes totally one sided.”

The Washington Post blogged about the criticism of the article, and reported that Denyer tried to interview Singh’s office but “his requests for interviews were ignored.”  The Post published Singh’s office’s Sept. 5 letter in full, which rejected Denyer’s claims of “ignored” interview.  According to the letter, “the interview was declined ’till the Monsoon Session’ of the Parliament” — Sept. 7.  The letter adds that Denyer “said sorry twice” by phone. Denyer replied, according to the Post, that regarding an interview, “there was no mention of the possibility of an interview” following the “Monsoon Session” and that his “apology was for the fact that the website was down.”

We wrote to Denyer asking what prompted the correction, why the attribution wasn’t originally included in the article, if the email First Post published was from him, and if the Post finds it OK to use quotes from other publications without attribution if the quoted person says it’s OK.  Denyer pointed to his tweets and comments to First Post, and said “it is probably best I leave it at that.”  He also directed us to the Post’s director of communications Kris Coratti, who told us by email that “Our correction on this issue stands. We have no further comment.”

On Twitter, Denyer wrote Sept. 5 to note that his report was “corrected…to add proper attribution of some comments that first appeared in Caravan.”  He added that he “would only stress that I spoke to both Guha and Baru. And that I continue to stand by the story.”  In previous tweets, he wrote that he “made no apology for the article” and told the Prime MInister’s office that his apologies were for “website issues.”

We’ve written to Caravan and Guha for comment and will update with any response.