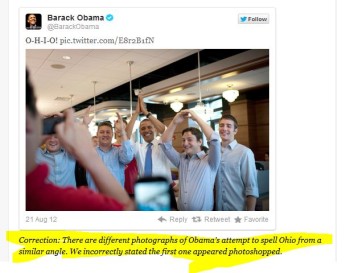 The Washington Post corrected a blogpost and a tweet that claimed a photo of U.S. President Barack Obama was Photoshopped.

As visual journalist Charles Apple pointed out, the Washington Post tweeted August 22 “Don’t be fooled. This photo of Obama is photoshopped” with a link to a story. Later, Apple wrote, the Post “retracted its accusation.”

In an August 22 tweet, the Washington Post wrote: “Correction re: that Obama photo. We were fooled,” with a link to this Washington Post blogpost on the photos of Obama with three others using their arms to form the letters “O-H-I-O.”

That post also carries a correction that states: “Correction: There are different photographs of Obama’s attempt to spell Ohio from a similar angle. We incorrectly stated the first one appeared photoshopped.”