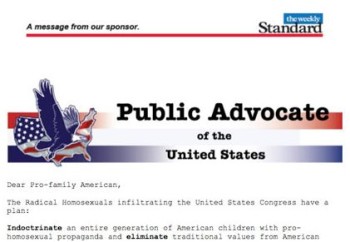 (Credit: Weekly Standard, via the Guardian)

The Weekly Standard, a “weekly conservative magazine,” apologized to its e-mail subscribers after its “vetting process broke down” and the site accidentally sent readers a “paid ad from a third party” that called gays “deviant” among other things, Media Bistro reported.

The Jan. 5 apology, signed by publisher Terry Eastland, said in part: “The ad was obviously not one we ordinarily accept, and we regret its distribution.”  The Atlantic Wire reported that Eastland told POLITICO that “This is obviously not the sort of advertising that we would accept, nor will we accept it in the future.”

According to Media Bistro’s report on the apology over the e-mail, the ad was sent out “before anyone with sense could read it” but “no one is getting canned” over the incident.

See here Media Bistro’s Jan. 5 article on the e-mail, which Media Bistro described as  “on behalf of an advertiser regarding a government mandate to educate people on homosexuality.”    The e-mail was addressed to “Pro-family American” and claimed, in part, that

“The Radical Homosexuals infiltrating the United States Congress have a plan:

Indoctrinate an entire generation of American children with pro-homosexual propaganda and eliminate traditional values from American society. Their ultimate dream is to create a new America based on sexual promiscuity in which the values you and I cherish are long forgotten.”

See the e-mail in full here on Salon‘s website.  The Guardian noted that the e-mail was “from the rightwing activist Eugene Delgaudio.”

iMediaEthics has written to Human Rights Campaign to ask if it is satisfied with the Weekly Standard’s response and will update with any response.