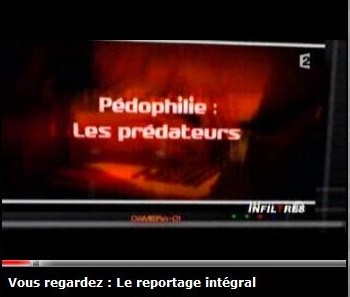 A week after French media denounced a team of its journalists for going undercover and turning over 22 names of suspected pedophiles to the police, details of what exactly happened are starting to come to light. The documentary film “The Infiltrators” first aired April 6 on France 2, a public national television channel, and 2.2 million people watched. The investigation was inspired by a recent troubling United Nations report that there are more than 750,000 online sexual predators

During their investigations, journalist Richard Laurent pretended to be both a 12-year-old girl and a pedophile, Time magazine  reports.  Laurent went online, “met” with potential pedophiles and even went to Montreal to meet a convicted pedophile in person.  The investigation focused on people in both France and Canada, according to Cyberpresse.

iMediaEthics wrote about immediate French denunciation of the program April 9.  The initial reports didn’t offer much information outside of the bare facts and that French media were upset at the journalists for going undercover and then working with the police.  Reports said that the largest union for French journalists, Syndicat National des Journalistes, said the tactics used by the journalists ruin the profession.

Time reports, “From the beginning, Richard and his producer, the press agency CAPA, decided they wouldn’t protect their sources following their investigation. ‘We knew that if we were witnesses of sexual attacks on minors we would say so,’ Richard told the daily Libération newspaper. ‘We are not going to hide behind our press cards.’”

Capa president Herve Chebalier said, according to Time and Cyberpresse: “We are journalists, but above all we are citizens. It’s my profound conviction we had to do it.”

Cyberpresse reported that the journalists felt that, above and beyond their personal judgements, they had to report because of a penal code article that punishes people who know of and don’t report violence against minors.

“Radio commentator Frédéric Bonnaud says, however, that this excuse ignores the larger point. ‘The problem is [Richard] shouldn’t have put himself in that situation in the first place,’ he said on Europe 1. Bonnaud described the journalist’s methods as being similar to a war photographer generating a conflict between opposing factions to create a photo-op.”

French Canadian site Cyberpress reported that this was the second case in ten days where journalists were called “informants” for the police.  Just a few days earlier, the police made a huge drug bust just after journalists did a report on drug trafficking in a Parisian neighborhood.  One comment in a Liberation piece wondered: coincidence or police co-journalists?

The Syndicat National des Journalistes code of ethics says journalists shouldn’t invoke a title or imaginary quality or use unfair means to obtain information or surprise the good faith of any person.

Regarding going undercover, the Society of Professional Journalists’ code of ethics says to “avoid undercover or other surreptitious methods of gathering information except when traditional open methods will not yield information vital to the public. Use of such methods should be explained as part of the story.”

iMediaEthics contacted the U.S.-based journalism organization for their views.

Andy Schotz, chairman of the SPJ ethics committee, told iMediaEthics, “The way that the code is written, it’s intentionally a broad set of ideas, and these are not rules, they are meant to be guidelines to help journalists ask the right questions, think of the right factors and be very thorough in weighing all of those factors before you go ahead and do something.”  The code is set somewhat broadly so that it can be interpreted in a case by case situation.

As Schotz said, two journalists might take the code and interpret it in different ways.  But, “the point is, this is not how we start…We deal in a business that’s all about the truth.”  Going undercover should be a last resort.

To avoid going undercover, journalists might consider re-angling their story.  Schotz said journalists should ask before going undercover if  “Would they have been able to report on this problem in another way?  Is this enough of a problem that it justifies using such a tactic?”  But, there is no black and white answer for the ethics of going undercover – only the suggestion that you should try to avoid it..

Because there’s still no answer why the French journalists chose to report undercover, Schotz couldn’t say if it was OK or not.  Their motivations are a key factor in knowing if there was a way to avoid going undercover

“The point is you have to think about what’s the more vital interest – using deception or getting information,” Schotz said.  “Is it really that difficult to find out that there are people trolling the internet?”

With the information available as of April 9, Schotz said the situation with the French journalists reminded him of “To Catch a Predator,” the MSNBC hidden camera TV show – where the goal is to go out and do a good thing and hand over names to the authorities.

Did the French journalists investigate for the news value, or did they do it for the ratings boost? That question seems key in determining how “journalistic” their enterprise was, or if it’s OK that they went undercover and turned the names over to enforcement.

When reporting undercover, Schotz emphasized the imporance of disclosure.  “In the end you need to explain at the end of your report, these are the tactics we had to go through.  It’s hard to go wrong with too much disclosure.  Too many people get burned with not enough” Schotz said.

Schotz referenced two notable cases of undercover journalism: first, in the 1970s the Chicago Sun-Times set up a bar and worked undercover in order to report corruption.

Also, in 1992, ABC News sent a couple of reporters undercover to a Food Lion and exposed unsanitary food handling.

As Bob Steele wrote in a 1997 piece on the Poynter Institute Web site,

“In the court of law a federal jury said ABC News and PrimeTime Live journalists trespassed and committed fraud while researching accusations that Food Lion supermarkets sold spoiled meat. It is important to note that the supermarket chain did not directly challenge in court the truth of that 1992 PrimeTime Live report. Food Lion bypassed a libel suit, undermining ABC’s reporting methods with a side-door legal strategy focusing on the falsification of employment applications and the failure of the workers to fulfill their assigned duties.”

Steele also wrote that “hidden cameras are overused and misused by both network and local television, and journalists too often use forms of deception and misrepresentation as a shortcut in their reporting.”

WORKING WITH THE POLICE

The second concern French media had with “The Infiltrators” is that the journalists turned over 22 names to the police.

Schotz said that turning information uncovered in reporting over to the police makes journalists “an arm of law enforcement.”

“Journalists in general do not go around acting as police officers and there’s good reasoning for that,” Schotz said.  “You’re aligning yourself with a certain element of the story – you’re taking sides.  Also you lose the faith that the public and sources have in you to be indepedendent.” Schotz asked how people would trust journalists if they thought you were just going turn around to the police.

“The Infiltrators” is available on the Capa Web site.