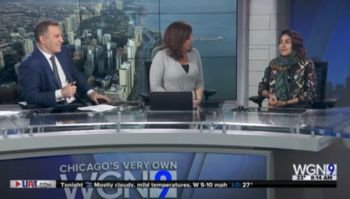 A screenshot from the WGN interview of Hoda Katebi. Katebi obtained and posted video of the interivew. (Credit: YouTube/Hoda Katebi)

WGN Chicago invited Muslim Iranian-American Hoda Katebi, who wears a hijab, on air to speak about her fashion blog. But the conversation suddenly switched from fashion to politics with a dash of xenophobia when one host asked her to talk about Iran and nuclear weapons, and the other told her “you don’t sound American.”

While the interview was ostensibly about fashion, co-host Larry Potash suddenly blind-sided Katebi with: “Let’s talk about nuclear weapons.” Potash said, “Some of our viewers may say we cannot trust Iran, what are your thoughts?” Katebi responded that she didn’t “think we can trust this country” and commented that “a lot of the weapons in the Middle East are completely brought in by the United States.” To that, co-host Robin Baumgarten said “a lot of Americans might take offense to that, you’re an American, you don’t sound like an American, you know what I mean?”

iMediaEthics wrote to WGN to ask why Katebi was asked about nuclear weapons, what the sounds-like-an-American comment meant, how many complaints were made over the interview and if any apology or statement about the interview was broadcast. A WGN spokesperson sent iMediaEthics a statement reading, “WGN-TV and Anchor Robin Baumgarten spoke with Hoda Katebi yesterday morning.  Robin apologized to Hoda and they had a constructive dialogue about micro-aggressions. WGN, Robin and Hoda will be working together to use this as a teachable moment to encourage education and a deeper understanding of race, religion and identity struggles.”

On her website, Katebi wrote about her reactions to the interview. “I was on WGN for a live interview last week, and was asked to speak about my work and my book, but when I gave answers the hosts didn’t like, their questions (and comments) started to get hostile, literally telling me I ‘don’t sound American,'” Katebi blogged.

She criticized WGN for asking her about nuclear weapons when she was invited on the show as a fashion blogger, explaining she was caught off guard. “Would they ever bring on a white chef to their show and then ask him about Brexit or his thoughts on the rise of white supremacy?” she asked.

Katebi further criticized the remark that she didn’t “sound like an American”. “Are they saying that Americans must not question their government, must see the world in black & white, and choose simplicity over nuanced understandings?” she wrote.

She went on to write, “what an incredibly loaded statement to say to a visibly Muslim woman on live TV, pushing every stereotype of ‘other’,  ‘foreign’, and ‘incompatible with America’ that Muslims are so systematically characterized as–and therefore used as justification to commit violence against, both here and abroad. If a white person said the same things as I did I guarantee you their ‘American-ness’ would not have been questioned.”

So last week I was told, on live TV, that I "don't sound American" because I refused to let the hosts turn a conversation about my book and work into a conversation about Iran's supposed nuclear weapons. I published the clip, and some thoughts, here–https://t.co/BQa2j0hNTJ

2/ WGN just called and Robin, the female anchor, sincerely apologized. (I also didn't realize so many of you called in! Like I said, ya'll on top of this — thank *you* for making this happen and refusing to normalize this)! I accepted, and proposed a few ways to fix this —

4/ They're going to get back to me on this idea, but in the meantime if you have any further ideas let me know hehe 😉 The apology was important, but it's also important to be able to use this moment as a teaching tool, and prevent it from happening again. Let's raise the bar.