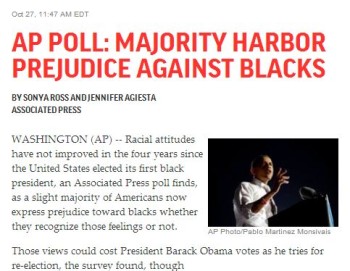 Editors’ Note: This is Part 1 of a 2-part analysis by David Moore of the Associated Press poll on racial attitudes, conducted by researchers from Stanford University, the University of Michigan, and NORC at the University of Chicago. See also 9 in 10 Americans can be classified as Racist against Either Blacks or Whites? What the AP Poll on Racial Attitudes really tells Us, Part 2.
Here are some startling findings of the recent Associated Press poll of racial attitudes in America:

Those are certainly not the figures you’ve read in recent news reports. Instead, you’re more likely to have read the Associated Press news story paragraph shown below, or some summary of it:

Yet, both my description of the poll results, and the AP description, are accurate. Clearly, both AP and I have left something out.

The graph below presents more extensive results of the second measure referred to in the AP paragraph, the one that measures “implicit” racial attitudes. (I am grateful to Josh Pasek of the University of Michigan, lead author of the academic report on the poll results, who at my request sent me the additional information.)

A more complicated picture of “racism” in America.

The AP news story focused on the “overall” numbers. Nowhere did it mention that the same scale of anti-black sentiments attributed to the public as a whole also showed close to half of all blacks harboring prejudice against their own race.

The story also fails to mention the surprising amount of anti-white prejudice that exists – 30% among whites themselves, with almost a half of blacks (47%) also expressing anti-white attitudes.

Had the story highlighted these results, certainly one of the first questions to be raised would be: Can “racism” be defined in such a way that so many blacks would themselves be considered “racist” against blacks?

Quality of the Study

Before I go any further, I should affirm that the method of polling the respondents (online, based on a probability sample), and the statistical analysis of the results, appear to be quite sound. I’m also inclined to believe that, as the AP story and the academic report suggest, there could well be some significant racism that exists in this country, and that it could have an impact on President Barack Obama’s approval ratings and re-election chances.

That said, I have some serious doubts about conclusions that were cited in the AP news story, doubts which I explain in this post and in a follow-up post. My focus in this article is on the “implicit” measure of racial attitudes, which also produces the higher percentage of Americans who can be characterized as racist. I will discuss the other measure of “explicit” anti-black attitudes in the forthcoming Part II.

According to the AP story, to measure “implicit racism,” respondents were shown

“a photo of a black, Hispanic or white male flashed on the screen before a neutral image of a Chinese character [or ideograph – not a person]. The respondents were then asked to rate their feelings toward the Chinese character.”

As  the researchers wrote in their academic paper:

The researchers go on to explain:

Note the asymmetry. Giving positive ratings to more white faces than black faces is labeled racist or anti-black, while the reverse is labeled only as “pro-black.”

In fact, to be objective about the labeling, one could (as I have done in the bar graph at the beginning of this article) equate pro-black with anti-white, and anti-black with pro-white. (In a personal email to me, Pasek confirmed that this interpretation is consistent with the way implicit racism was measured.)

So, where does that leave us with respect to this “implicit” measure of racial attitudes?

It appears that racism, as measured by this process, is much more complicated than the news story would suggest. We cannot talk about the 56% of Americans with “anti-black” attitudes as being “racist,” if we do not also admit that close to half of all blacks are also “racist” – against their own race.

If we accept the measures of anti-black attitudes as a valid indicator of racism, then we also have to accept the anti-white measures as racism. And if we do so, then we have to conclude that roughly nine in ten Americans are racist.

But the AP news story mentions none of this. The story is written in a way that conceals from the public, rather than enlightens it, as to what “racism” means in this context.

Had all the findings been included, the story would have forced readers to confront a more complex picture of racism in America than the simple narrative (accurate but incomplete) that many whites harbor prejudice against blacks.

Instead, the AP news story feeds us limited information that distorts the poll findings and, ironically, itself reinforces racial stereotypical thinking.

UPDATE: 11/4/2012 4:15 PM EST: iMediaEthics asked the AP earlier today for any response to this column.  We’ll include any comments in a forthcoming follow-up report.

*The AP story cited the 56% figure, while the information provided by Josh Pasek showed 55%, a non-substantive difference due to rounding error. For purposes of this article, I graphed the 56% figure to be consistent with the AP story.

This is Part 1 of a 2-part analysis by David Moore of the Associated Press poll on racial attitudes, conducted by researchers from Stanford University, the University of Michigan, and NORC at the University of Chicago. See also 9 in 10 Americans can be classified as Racist against Either Blacks or Whites? What the AP Poll on Racial Attitudes really tells Us, Part 2.