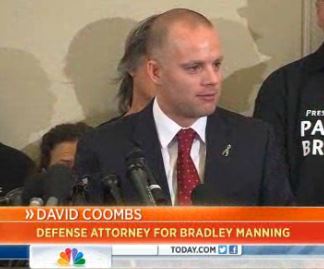 Bradley Manning's lawyer David Coombs announced last week on NBC's Today show that Manning would like to be known as Chelsea. "I am Chelsea Manning. I am female," Manning's statement read.

Bradley Manning, recently convicted of and sentenced for leaking classified documents to WikiLeaks, announced last week that he wants to be known as female Chelsea Manning.

So how will the media report on Manning? According to USA Today’s round-up, a few news outlets are officially referring to Manning as a female. “The Huffington Post, the London Daily Mail, MSNBC and Slate have all started using the feminine pronoun,” USA Today reported.

But, USA Today’s Editor in Chief David Callaway is quoted as saying the newspaper hasn’t decided to label Manning a she just yet. Callaway said:

“Style evolves with the culture, and the latest style recommendations are that transgender people should be described as they want to be described. That said, Private Manning has been known as a male to this day, so should be regarded as ‘he’ at least for the immediate future. We will continue to discuss.”

The Associated Press issued an “advisory” August 26 saying that it “will henceforth use Pvt. Chelsea E. Manning and female pronouns…in accordance with her wishes to live as a woman.” The AP added that by doing so it will be “in conformity with the transgender guidance in the AP stylebook” to abide by “the pronoun preferred by the individuals.”

The Globe and Mail‘s public editor Sylvia Stead blogged about the news to say that the newspaper will plan to refer to Manning as a woman but mention Manning was “formerly known as Pfc. Bradley Manning.”

As Stead explained, normally the newspaper “often waits for a formal name change,” but “there is a different practice for individuals.”  And in terms of Manning’s gender, the Globe and Mail will adhere to Manning’s “wishes.” Stead wrote:

“Although there is nothing specific in The Globe and Mail’s style guide, the practice for transgender people, has been to respect the wishes of the individual as to whether he or she wishes to identify as a woman or a man.

“Future stories about Manning should refer to both identities, so The Globe’s articles will say Chelsea Manning, formerly known as Pfc. Bradley Manning, and Ms. Manning or she on second reference.”

Likewise, the New York Times plans to follow Manning’s stated wishes and identify Manning as a she.  Public editor Margaret Sullivan blogged that “the Times will explain the change in stories,” quoting Susan Wessling, “the deputy editor who supervises The Times’ copy editors,” as saying the paper wants to “respect the preferences of the subject” and “provide clarity for readers.”

“transgender (adj.) is an overall term for people whose current identity differs from their sex at birth, whether or not they have changed their biological characteristics. Cite a person’s transgender status only when it is pertinent and its pertinence is clear to the reader. Unless a former name is newsworthy or pertinent, use the name and pronouns (he, his, she, her, hers) preferred by the transgender person. If no preference is known, use the pronouns consistent with the way the subject lives publicly.”

NPR also said it would “respect” Manning’s decision and refer to Manning as Chelsea. A memo from NPR’s Managing Editor for Standards and Practice Stu Seidel, published by NPR, explains

“Army Private Manning’s request to no longer be known as ‘Bradley’ is one NPR should respect. We allow people to decide what they want to be called. Manning asks to be called ‘Chelsea.’ (This is different from granting anonymity or using a pseudonym for a source, since Private Manning has made public his decision to change his name.)

“Manning also asked to be referred to as ‘she,’ not  ‘he.’ That request gets into many questions of defining an individual’s gender that we feel are best left to the person in question, so long as we are telling a complete story.”

Originally, NPR said it would report that Manning identifies as Chelsea but “use male-related pronouns,” Seidel noted. However, after public reaction and debate, NPR officially said it would say Chelsea Manning is a she who was known as Bradley Manning. Seidel’s guidance to staff said:

“Going forward, on first reference, please use ‘Chelsea Manning.’ For the near term, we should make clear that we are talking about the person who gained public notice as ‘Bradley Manning.’ (The need for that clarification will, undoubtedly, diminish as the name Chelsea Manning becomes better known – and as Private Manning fades from routine public prominence.)

“On the pronoun front, the best solution is the simplest: If we’re going to use a new name for a transgender person, we should change pronouns as appropriate. In this case, we should refer to Manning as a ‘she.”‘This is a matter of clarity and consistency.”

Meanwhile, Poynter reported that Washington Post copy editor Bill Walsh said the paper is “in the process of reviewing our style in light of the Manning situation.”

iMediaEthics has previously written about concerns with reporting on transgender issues. Earlier this year, the UK Press Complaints Commission announced it was going to create advice for British reporters on how to report on transgender issues after numerous complaints about transgender stories. In particular, more than 100 complaints were made to the PCC over a column from The Daily Mail‘s Richard Littlejohn, who criticized a teacher named Lucy Meadows (formerly known as Nathan Upton) who had gender reassignment.

In March, however, the PCC ruled that it was OK for an Observer columnist, Julie Burchill, to call transgender people “bed-wetters in bad wigs,” and “dicks in chicks’ clothing,” because Burchill didn’t single out anyone in her general comments, which were part of a one-off column. Readers complained under clauses for discrimination, accuracy and harassment.