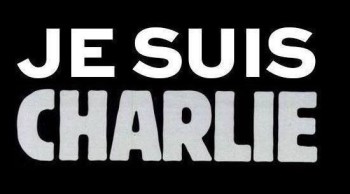 Following the terrorist attack on Paris-based satirical magazine Charlie Hebdo this morning, some news outlets are censoring or otherwise not using images of some of the magazine’s cartoons, Gawker reported.

Charlie Hebdo’s offices were attacked by gunmen today. Twelve people, including the magazine’s editor Stéphane Charbonnier, were killed and and “at least 20 others were injured,” according to the Washington Post.  Charlie Hebdo was bombed in the early morning 2011 over its published cartoons of Muhammad. The office was destroyed, according to the Telegraph. The attack came after “it published a spoof issue ‘guest edited’ by the Prophet Muhammad to salute the victory of an Islamist party in Tunisian elections,” the NYTimes reported in 2011, adding that Charlie Hebdo’s website was hacked.

The Telegraph blurred one image and cropped another image to cover up any images of cartoons.

Below see the cropped image.

To show the changes, Gawker published a GIF of the real version of the photo with the censored version.

The AP chose not to show any images of the Charlie Hebdo cartoons as well, BuzzFeed noted, quoting AP spokesperson Paul Colford saying “None of the images distributed by AP showed cartoons of the Prophet Muhammad. It’s been our policy for years that we refrain from moving deliberately provocative images.”

“Although we are not at this time showing the Charlie Hebdo cartoons of the Prophet considered offensive by many Muslims, platforms are encouraged to verbally describe the cartoons in detail,” Griffiths wrote. “This is key to understanding the nature of the attack on the magazine and the tension between free expression and respect for religion.”

The memo said CNN would allow images that aren’t focused only on the cartoons though.

“Video or stills of street protests showing Parisians holding up copies of the offensive cartoons, if shot wide, are also OK. Avoid close-ups of the cartoons that make them clearly legible,” he went on. “It’s also OK to show most of the protest cartoons making the rounds online, though care should be taken to avoid examples that include within them detailed depictions of the Charlie Hebdo cartoons.”

UPDATE: 1/8/2015 11:53 AM EST : The Telegraph pointed iMediaEthics to its leader column this morning about Charlie Hebdo.

The column, “A terrible price for freedom of speech,” denied that the Telegraph censored images from Charlie Hebdo out of intimidation but rather because it was a personal editorial decision. The column stated in part:

“Free speech offers latitude but not necessarily license. It does not follow that because many newspapers, such as this one, do not publish cartoons of Mohammed that somehow we have been intimidated into not speaking out. Any suggestion that a publication failing to follow Charlie Hebdo’s example is caving into terrorism is absurd: we all make editorial decisions to avoid offending people that have nothing to do with appeasing militant Islamists.”