Why Bloomberg's Poll on Income Inequality is Misleading - iMediaEthics

Why Bloomberg’s Poll on Income Inequality is Misleading 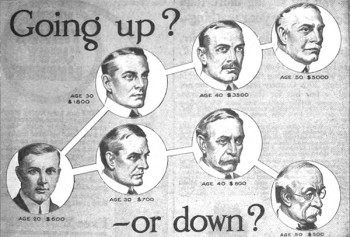 1916 advertisement for vocational school in the back of a US magazine. (Via Wikipedia)

What do Americans think of income inequality? In two recent polls, we get very different views of Americans’ views about the government’s potential role in reducing the disparity.

A CBS News poll suggests a clear majority believing the government should do “more to reduce the gap between the rich and the poor in this country,” while a Bloomberg poll finds the public evenly divided.

The difference in the timing of the polls (one conducted last January, the other in April) is almost certainly not the cause of the starkly different results. Instead, the different question wording provides a clue.

CBS asked a straightforward, non-tendentious question: “Should the government do more to reduce the gap between the rich and the poor in this country, or is this something the government should not be doing?”

By contrast, Bloomberg loaded its question with the following construction:

Instead of asking a straightforward question, as CBS did, Bloomberg chose instead to pit government policies to reduce inequality against the mythical and abstract concept of a free market. The question phrasing essentially tells the respondents that if the government tries to reduce the gap between the rich and poor, it will stop (or at least negatively affect) the “market” from operating “freely.”

Of course, that’s nonsense. First, it’s not clear what the pollster means by “market.” Second, there is no “freely operating market” in the United States that would necessarily be damaged by government policies to reduce income inequality. Almost any market the pollster might mean is already highly regulated (stock market, for example), and there is no reason to believe that government policies to reduce inequality would necessarily increase such regulations.

How could the government address inequality in America? As the Washington Post points out, a report by the non-partisan Congressional Budget Office shows that the tax code itself re-distributes income upward, with the net effect of increasing inequality. Government policies that changed the tax code could be implemented to reduce inequality, with no additional impact on whatever “free market” Bloomberg is concerned about.

In short, it’s clear that the presumed trade-off between a free market and at least some government action to reduce inequality is simply misleading.

Both polls preceded their policy questions by asking whether people thought the income gap was increasing, decreasing or staying about the same. Both polls found about two-thirds of Americans saying the gap is increasing, with CBS showing just 2 percent, and Bloomberg showing 4 percent, with no opinion.

These results might suggest an almost completely engaged public on the issue, but that’s highly unlikely given the low level of public knowledge on most issues revealed in many Pew polls. Both CBS and Bloomberg used a forced-choice format, which means the question did not provide any explicit “don’t know” option. So, respondents were essentially pressured to come up with some opinion, regardless of how much thought they might have given to the issue. And they did.

Still, if we accept the near certainty that large numbers of Americans simply don’t know much about the inequality issue, that fact can explain why Bloomberg’s faux trade-off of a “free market” vs. government policies to reduce the income gap can confuse many respondents. They don’t know much about the issue anyway, and when told government action could damage that sacred shibboleth, the “free market,” many respondents simply opted to protect what they think is the status quo.

Both polls, of course, over-estimate the percentage of people with meaningful opinions on the matter. But if polls are determined to measure ‘top-of-mind’ reactions as though they represent public opinion, at least the pollsters ought to ask objective questions.

In this case, CBS did. Bloomberg did not.

Unfortunately, Bloomberg has a habit of asking tendentious questions. In the same poll on income inequality, Bloomberg also asked this doozy of a question:

“Do you think the Iranian government has evolved to be reliable as a negotiating partner, or does their continuing religious theocracy make them unreliable negotiators?”

Again, instead of asking whether the Iranian government is, or is not, reliable as a negotiating partner, Bloomberg threw in the information about the country’s “continuing religious theocracy.” Of course, that extra bit of information can’t help but influence many respondents to say no. Results: only 20 percent said Iran was reliable, 68 percent said unreliable.

But what’s the point of a reputable news organization engaging in such manipulation of respondents to produce distorted pictures of “public opinion”? That’s what propagandists do. We should expect better of Bloomberg.

Why Bloomberg’s Poll on Income Inequality is Misleading