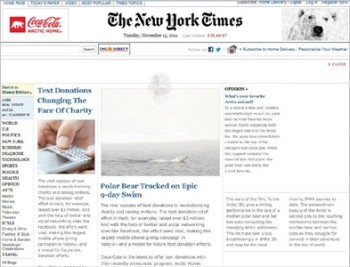 This New York Times ad presents itself as a regular NYT homepage. Why isn't there an advertisement label?

The ad – for Coca Cola – rolls over the Times’ home page, replacing the news section with three pages of ads about polar bears and charity.  Most concerning is the first page, which replaces the REAL New York Times homepage with a phony homepage containing fake stories about polar bears.  No label of advertisement appears on the page, and we at iMediaEthics were misled to believe these stories were Times’ reports. Headlines for the three stories on the page read: “Text donations changing the face of charity,” “Polar Bear Tracked on Epic 9-Day Swim” and “Opinion: What’s your Favorite Arctic Animal.”

See the three pages of the ad here, here and here.  See here a screenshot of how the advertisement animation transitions.

After the phony news page, an image of a polar bear, made up of what appears to be newspaper thumbprints, appears, followed by a page calling for readers to “help protect the polar bear by donating via text.”

Clicking on any of these pages redirects to Coca Cola’s Arctic Home website.

We question if the New York Times is going the route of the Los Angeles Times, which has been criticized for selling its front page for advertisements.  At least three times last year, the newspaper published wrap-around ads which, while labeled advertisement, too closely mirrored the newspaper’s front page and deceived readers.

We have written to the New York Times to ask why this advertisement isn’t labeled as such and what the Times’ guidelines are for advertisements that appear similar to news content. We will update with any response.

“The animated Coca Cola ad is clearly an advertisement and not something our readers would confuse with our journalism. The attached image is a static screen shot of a moving image that only lasts for a second or two before the animated thumb prints begin to create the image of a polar bear.”

iMediaEthics questions the defense that the ad only appears “for a second or two.” iMediaEthics editor-in-chief and publisher Rhonda Roland Shearer asked herself “Why am I reading about polar bears?” after following a link to the Times site this morning. She recognized the ad as a real news story that suddenly melted into a large bear covering the screen.

Also, Shearer points out that the ethical value of keeping a boundary between ads and editorial does not allow a 5 second rule (like dropping food on the floor under 5 seconds means its still eatable. See “Five Second Rule“.) Is the new standard: if its only 2 seconds, you can use a faux Times page that indicates actual news as part of an ad ?

iMediaEthics’ view is that it is never OK to give the false impression that an ad is a real editorial or news piece.

UPDATE: 11/15/2011 4:01 PM EST: Visual journalist Charles Apple also weighed in on the Times’ ad, which he called “one of the most obtrusive ads yet.” See his post here.  Columbia Journalism Review’s Clint Hendler also wrote about this ad here.  Hendler noted that while NYT spokesperson Eileen Murphy claimed the ad “doesn’t look at all like the New York Times,” he found “the ‘opinion’ header font looks very, very, Times-like, and so do the mock headlines, though the latter are a different hue than the Times’ blue headlines.”

iMediaEthics notes that at least one of the headlines including in the Times’ ad is from a real news story.  While the content of the “story” in the Times’ ad is apparently made-up, a January 25, 2011 article by UPI.com carries the same headline “Polar Bear tracked on epic 9-day swim.”