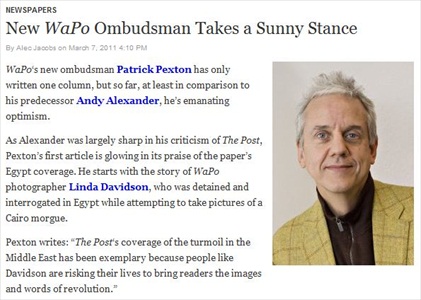 He recounted how Washington Post photographer Linda Davidson was “not only arrested twice but also suffered a bloody gash to her head from a flying rock while photographing the violence in Tahrir Square.” He argues, The Post’s coverage of the turmoil in the Middle East has been exemplary because people like Davidson are risking their lives to bring readers the images and words of revolution.

iMediaEthics is concerned about the tone of Pexton’s inaugural column. As the ombudsman for the Washington Post, his role is to be a representative for the readers — and not a defender of the newspaper.   His job responsibilities include “overseeing the Post’s journalistic integrity, accuracy and ethics, and responding to readers’ concerns.”

Granted, Pexton did note that his column, published March 4, is a “positive” one.  He explained “I think good work should be praised. Emulation of the good improves a publication as much as avoidance of the bad, about which I’ll have plenty of occasion to write.”

It’s one thing to praise the Post’s coverage in light of a controversy (like when the New York Times’ public editor Arthur Brisbane defended his newspaper’s Sept. 2010 reporting on the alleged phone hacking at News of the World). However, for the newest ombudsman to start off his term penning unsolicited, uncontroversial praise for the newspaper?  And, though having a photographer injured on the job is a testament to journalistic grit, the Washington Post wasn’t the only news outlet reporting from Egypt, nor were they the only outlet to have had members of their staff injured, attacked or worse in Egypt.

Indeed, Alexander often criticized the newspaper, and his final column was no exception.  In that January column, he commented that the Post’s “journalistic quality has declined.”

Alexander also questioned if the newspaper could “regain its legacy of excellence.”  In previous columns, Alexander criticized the newspaper for its use of anonymous sources and its corrections system, among other issues.

It will be interesting to see if, in future columns, Pexton takes his duties as ombudsman seriously enough to offer the sort of hardnosed criticism regularly supplied by Alexander. Otherwise, it gives the appearance that the Post hired him to go easier on the newspaper than his predecessor.