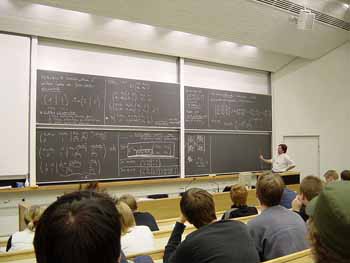 A math lecture at Helsinki University of Technology -- Something from which journalists might benefit, according to Craig Silverman (Public Domain Image courtesy of Wikimedia Commons)

Regret The Error’s Craig Silverman has a great post up at the Columbia Journalism Review about why journalists should learn math. In addition to good suggestions for journalists lacking confidence in their math skills, Silverman reveals an important truth about mathematical errors in journalism: In most cases, you don’t need to be good at math to avoid making mistakes, you just have to be good at fact-checking.

“First, journalists need to acquire the basic math skills needed to properly handle numbers and figures. Second, they need to develop the habit of double-checking every number and figure. (I’d call this the mantra of ‘Math twice, publish once,’ but I don’t want to sacrifice language at the altar of arithmetic.),” he writes.

Silverman advocates math skills, but when he breaks down the most common reasons for numerical errors, it doesn’t really come down to a problem of math-knowledge, but a lack of double-checking:

Numerical errors usually occur for one of these five reasons:

For every one of the situations cited above, a reporter need not know much math; they need only check the math in their story with someone who does. And all of these are, of course, tools a journalist should be using to vet all the facts in their story, not just the math-ones.

For those who want to develop the confidence to assess the quality of a scientific study, or recognize at first (or second) glance that a number in a story just doesn’t look right, Silverman suggests some additional tools. “It’s time to recognize that handling and interpreting math and numbers are some of the cornerstones of journalism,” he writes. For those interested in a brush up, “There are some excellent, free online guides for journalists.”

This online presentation from CubReporters.org provides a solid overview of percentages, crowd counts, and means and medians, among other information. The great writing and reporting instructor Jack Hart also has several pages of excellent numeracy advice available online here. It’s a fantastic resource. Finally, Robert Niles has a page dedicated to math for journalists.

There are also a few books written specifically for journalists. The gold standard has for a long time been News and Numbers: A Guide to Reporting Statistical Claims and Controversies in Health and Other Fields. You should also look at Math Tools for Journalists and Numbers in the Newsroom: Using Math and Statistics in News.

But even without all of this, the simple act of making sure you know every fact in your story is true before publication can prevent many of the errors Silverman critiques in his blog, and we at StinkyJournalism critique in ours.

As Silverman writes, journalists need to boost their math confidence or at the very least their math-skepticism-plus-fact-checking confidence. “Almost every story contains a number, be it a statistic, an address, or someone’s age. Journalists deal with numbers every single day, and yet so many of us willingly profess ignorance or fear when faced with simple arithmetic… This attitude makes journalists feel as though they can’t challenge the statistics contained in a press release. We’re not a fancy retweeting service for companies and governments—our role is to verify information.”

It’s time to live up to that role.