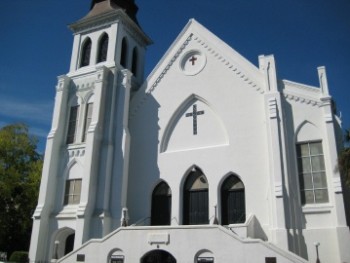 Nine people were fatally shot in Charleston, South Carolina, but was it an act of terrorism?

Dylann Roof has been charged for the June 17 mass murders at the historic black church, Mother Emanuel Hope AME, on Calhoun Street in downtown Charleston. It has been reported that Roof said he wanted to kill black people.

Many have wondered why the Charleston shootings, being investigated as a hate crime, haven’t been called terrorism and why the media has or hasn’t used the term.

“We use action words to describe what happened and let the facts reveal whether it was terrorism, a hate crime, or murder,” NPR standards editor Mark Memmott told Jensen. Memmott further said, “We’re certainly not going to shy away from reporting what is revealed about the suspect and his motivations.”

Jensen commented that it “seems appropriate” to be cautious and refrain from calling the Charleston shootings terrorism until more information has been shared, or unless NPR is quoting someone else.

From her survey of NPR’s Charleston shootings coverage, Jensen reported: “While NPR itself did not refer to the suspect as a ‘terrorist’ or call the killing ‘terrorism,’ several stories, beginning yesterday afternoon, have quoted people using the word to describe the situation, and that also seems appropriate.”

Jensen’s blogpost responded to complaints from the University of South Carolina assistant professor of the practice of international relations, Jeffrey Fields, who argued that “By any stretch and using any of the definitions including the State Department’s or 18 U.S.C. § 2331, this is terrorism.”

Fields asked: “Why is NPR (and so many other media outlets) ‘avoiding’ using this term? It only serves to reinforce the notion that terrorism equates to Muslims and foreigners. Yes, this is a hate crime. That doesn’t preclude calling it terrorism either in common parlance or legal terms.”

Fields further compared the shootings in Charleston to the Boston Marathon bombings, which were widely called terrorism before authorities announced suspects.

Jensen countered that the use of the word terrorism for the Boston bombings came from authorities, who were quoted. “My quick takeaway is that NPR has been largely consistent in its policy,” Jensen wrote. “When the word ‘terrorism’ pops up early on, it’s because someone else, usually an elected or law enforcement official, has used it.” Jensen added that since receiving Fields’ complaint, NPR had published reports quoting others describing the shootings in South Carolina as terrorism.

On the other hand, FBI director James Comey said in a press conference that he didn’t view the shootings in Charleston as terrorism. Mediaite reported Comey said:

“Terrorism is act of violence done or threatens to in order to try to influence a public body or citizenry so it’s more of a political act and again based on what I know so more I don’t see it as a political act.”

The Washington Post asked “Was what happened in Charleston terrorism?” interviewing terrorism expert Ban Phillips, who said it was “clearly a terrorist act.”

“We should, for all the worst reasons, be adept by now at recognizing terrorism when we see it, and what happened in Charleston was nothing less than an act of terror,” The New Yorker wrote, pointing out that “the term was missing from early descriptions of the incident.”

“The ‎Charleston shooting‬ involved the assassination of a state senator and the intentional killing and terrorizing of African Americans. This was a terrorist attack on U.S. soil. It’s really that simple,” he wrote.

New York Magazine‘s Margaret Hartmann blogged “Why the Charleston Shooter should be called a terrorist.”

The Telegraph published, “What happened in Charleston was terrorism. It’s important that we say so.”

The Poynter Institute’s Al Tompkins argued “we don’t know yet” if the shootings were terrorism, pointing out the it is “such a loaded term.”

The Guardian ran a commentary, “Charleston shooting was an act of terror.”