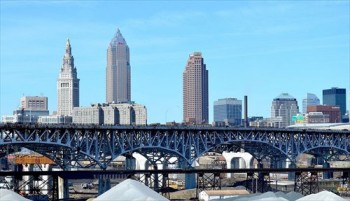 An Ohio media outlet sparked outrage after it published a report on the criminal pasts of the father of Tamir Rice, the 12-year-old boy fatally shot by police this month at a Cleveland recreation center.

Rice died holding a airsoft pellet gun. Police were responding to a 911 call about someone pointing a gun. The caller said the gun was “probably fake” and “I don’t know if it’s real or not,” the Associated Press reported.

The article, “Tamir Rice’s father has history of domestic violence,” was written by Northeast Ohio Media Group’s Brandon Blackwell and published on the website for the Cleveland Plain Dealer Nov. 26.

The relevance of the criminal past of Rice’s father is not explained in the reporting nor does it appear to have anything to do with Rice’s shooting, which is why some readers say they are upset.

.@clevelanddotcom You trivialized the death of a 12yo by insinuating it could have been prevented if his dad wasn’t a criminal. #TamirRice

So close to 200 sigs! Tell @clevelanddotcom to apologize for linking #TamirRice‘s death to his dad’s criminal record. http://t.co/ze7Aq14yTv

So looking into Tamir Rice’s dad’s criminal record might “help to understand why he was carrying a toy gun” IT WAS A TOY. That’s why!!

Cleveland Scene, a weekly alternative news magazine, explained their view of the criticism:  “Response to the article was quick and harsh: this was victim blaming — as we’ve seen time and time again in cases of African American victims and white shooters, be they police or the George Zimmerman persuasion — except this was still somehow worse,” Cleveland Scene wrote. “What the hell did Rice’s parents’ criminal record have to do with his being shot 1.5 seconds after a police car pulled up to the recreation center, folks from around the world asked.”

The article reported that Rice’s father has “multiple convictions for the abuse of women.”   After publication, Cleveland.com added an update to disclose “A line has been added to this story to give insight into the motivation to investigate the parents’ background.”

That appears to be this graph added high in the story:

“People from across the region have been asking whether Rice grew up around violence. The Northeast Ohio Media Group investigated the backgrounds of the parents and found the mother and father both have violent pasts.”

In addition, on Nov. 27, Northeast Ohio Media Group vice president of content Chris Quinn published an article seemingly responding to the criticism and saying that the reports on Rice were part of a series “examination of how Cleveland police use force.”

“Our reporters at NEOMG have been looking into Tamir’s background, to see if he lived a life exposed to violence that could explain why it might be normal for him to randomly aim what looks like a real gun in a public place,” Quinn stated. “They have pursued tips about his life from Cleveland to Strongsville and continue to investigate. So far, they have found that Tamir had never been in trouble with the police, and we published a story on that.”

Quinn added that the paper reported on Rice’s parents’ criminal history because readers wanted to know and “we believe it may shed further light on why this 12 year old was waving a weapon around a public park.”

Quinn denied that the paper was publishing reports on Rice’s parents because they were trying “to excuse what police did.”

“We don’t seek to excuse anyone, just to inform, but we welcome those complaints and are glad the critics are participating in this much-needed community discussion,” he wrote.  He further defended the coverage against criticism: “I don’t agree with the criticism, as I believe our duty is to illuminate.”

Quinn pointed iMediaEthics to his own article on the Rice coverage, referenced above, and an article by readers representative Ted Diadiun.

Specifically concerning the Rice coverage, Diadiun argued that “The intent of the reports was to show the difficult environment the young man had grown up in, but they angered some readers, who interpreted them as an attempt to portray him as a youngster prone to violence.”

He said that it’s normal to report on victim’s background. “In the past the information about his parents would have been blended into a narrative newspaper perspective piece, likely a Sunday or two later. But placed in its own story as facts and news rolled out, it was jarring to some,” he wrote.

Diadiun wrote in the comments that the article about RIce’s father was “only online.” He defended again the article as “standard operating procedure” and denied the “young man’s homelife and parental influences are irrelavant.”

He also commented as to why he was responding on Facebook. He wrote:

“I’m spending most of my time responding to people here rather than in the comment area of my column because you are using your real names in reasonable conversation here, rather than lobbing anonymous insults from the tall weeds … much more satisfying here.”

Despite Quinn’s explanation and defense of the article, Cleveland Scene published an anonymous e-mail “sent from a Plain Dealer employee to all PD and NEOMG staff” calling the story “shameful” and asking for relevance of the report.  The update seemingly contextualizing the report “is borderline insulting,” the staffer wrote, asking why the newspaper isn’t investigating the families of the officers at the scene if it is important to report on Rice’s parents.  “Folks, we’re better than this,” the anonymous staffer wrote.