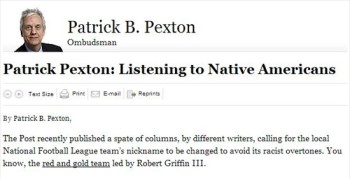 The Washington Post’s outgoing ombudsman Patrick Pexton addressed two different cases of how the newspaper has sensitively handled reporting on Native Americans in a Feb. 8 post.

In one case, the Post cut a story and photo about a  school swim team because the photo pictured “the girls, who dress in a different theme each meet to encourage team spirit, wearing face paint and feathers — seemingly Native American warrior garb,” which could be offensive and “subject” the young students to criticism.

Pexton likened dressing in “face paint and feathers” to donning military uniforms, which is “against federal law for a civilian to wear the uniform of a U.S. soldier, sailor, airman or Marine for personal gain” and explained that since the students are minors, the newspaper had to protect them from any of that potential criticism.

And in the other case, Post columnists advocated for the NFL team the Washington Redskins to be re-named. As iMediaEthics has written, the Kansas City Star announced last fall it wouldn’t use the team’s name “Redskins” because it’s a racial epithet.  Star public editor Derek Donovan explained: “I see no compelling reason for any publisher to reprint an egregiously offensive term as a casual matter of course.”