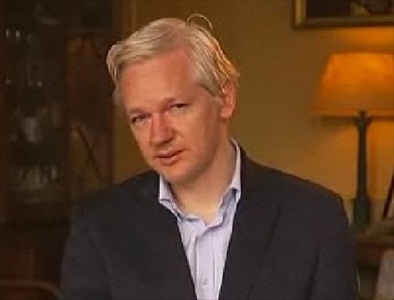 Julian Assange said WikiLeaks is in the process of suing the Guardian over claims made in its book about the leaks website. (credit: ABC)

WikiLeaks’ Julian Assange made his “first formal public appearance” since turning himself in to authorities last December in relation to rape accusations, the Guardian reported. The New Statesman-sponsored debate was at the Frontline Club, which housed Assange prior to his arrest last December. Read and see clips from the debate here and here.

In that appearance, Assange claimed that WikiLeaks “is more accountable than democratically elected governments because it accepts donations from members of the public.”

Assange indicated that members of the public “vote with your wallets every week” to keep WikiLeaks going. However, Douglas Murray, director of the UK nonprofit Centre for Social Cohesion, reportedly countered that claim noting that Assange isn’t elected.  He also reportedly “challenged” Assange about WikiLeaks’ funding and employees including “Holocaust denier Israel Shamir, who has worked with the site.”

Assange also claimed that WikiLeaks “is in the process of suing the Guardian” over claims in its book about WikiLeaks.  One of those claims included that Assange reportedly said if any informants named in the WikiLeaks leaks were killed, they “had it coming to them.”

in an interview with Australian Broadcasting Corp’s “current affairs programme”, Assange added that the statement the Guardian attributed to him is “completely fabricated.”

Assange commented that he’s more popular than the Australian prime minister.  As evidence, Assange cited “Australian opinion polls” that he says indicate “WikiLeaks and myself have far greater popularity amongst the Australian population than sitting Prime Ministers have had in many years.”

In that interview, Assange also stated WikiLeaks is working with more than 63 media outlets and that the site has published more than 7,000 of the diplomatic cables.

He said that WikiLeaks has been set up to operate without him, both to “avoid interruption to our publishing” and “to provide disincentive for decapitation attacks on the organisation.”

The Department of Justice commented on criticism of its court order for a handful of WikiLeaks volunteers’ Twitter information, Cnet reported.

According to Cnet, prosecutors defended its order as “routine compelled disclosure” and noted that grand juries often call for this information sans complaints of “chilling effects.”

The ACLU and EFF appealed a March 11 judge ruling OK’ing the order.  If the order is ultimately granted, Twitter would have to turn over “all direct messages” associated with the accounts in question, even if the messages had nothing to do with WikiLeaks.

The original subpoena was filed in December 2010, and called on Twitter “not to disclose its existence” to those whose information was being sought.

The subpoena calls for the Twitter information of Assange, Bradley Manning and volunteers Jacob Appelbaum, Birgitta Jonsdottir and Rop Gongrijp.

NPR reported late last month that a WikiLeaks billboard has been put up in Hollywood.  The billboard was sponsored by “an internet campaign…started by Nick Johnson at a website called Epic Step.”

The billboard shows a photo of Assange and the phrase: “WikiLeaks: Giving us the truth when everyone else refuses to.”  Next up may be a Chicago billboard, according to National Public Radio.