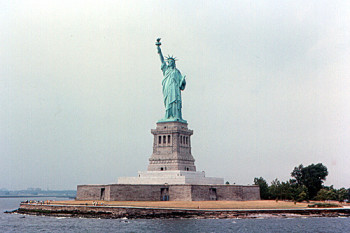 The statue of Liberty is a symbol of immigration in the US. (Credit: Roger Wollstadt via Flickr)

Will The Guardian stop using the term “illegal immigrant?”

Though not unwilling to make a change, The Guardian hasn’t decided what to use instead of the term. “I think it would be the right thing to do,” readers editor Chris Elliott told iMediaEthics by e-mail, in response to our question asking if The Guardian would stop using “illegal immigrant.”

Elliott told iMediaEthics that the British newspaper may issue a decision in the next month on whether or not to use “illegal immigrant” moving forward.

Elliott discussed the term with readers in an Aug. 24 column. Many news outlets are creating new policies against using such terminology.

The topic was raised recently after the newspaper received complaints from advocacy organizations Right to Remain and The Refugee Council. “We have a lobby” from  organizations calling for the paper to drop the term, he wrote, “but I think it is one making perfectly reasonable arguments that have been accepted in relation to other terms.”
Right to Remain complained over The Guardian‘s use of “illegal immigrants” in a July 30 story. The organization’s coordinator Lisa Matthews explained in her complaint to the paper that the term is “inaccurate and dangerous” as well as “dehumanising.” She wrote:

“It is also a dehumanising phrase, treating all undocumented migrants as a homogenised mass instead of the reality: individuals with unique experiences and stories to tell, who have not had their right to be in the UK recognised, usually due to legal and bureaucratic barriers, and the government’s increasing criminalisation of migration. The United Nations and the European parliament have called for an end to using the term, promoting the use of ‘undocumented’ or ‘irregular’ migrants instead.”

The Refugee Council’s Rebecca Moore also raised the issue in her complaint to the paper:  “While a person’s actions can be illegal, it is not possible for a person themselves to be illegal.”

Earlier this year, the UK National Union of Journalists advised journalists against using the terms “bogus,” “illegal,” and” failed” when referring to people seeking asylum. They also recommend journalists use “undocumentedd” or “irregular” when reporting on people in English with expired visas.

The Los Angeles Times, New York Times, USA Today, San Francisco Chronicle and Associated Press all released new guidelines for reporting on immigration in the past year and a half.