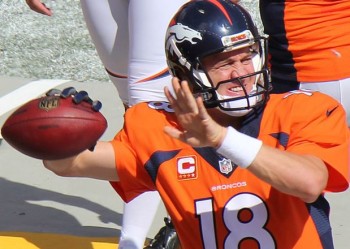 The documentary The Dark Side: Secrets of the Sports Dopers is posted on Gawker-owned site Deadspin. It “linked a number of professional athletes, including NFL great Peyton Manning, to performance-enhancing drugs,” CNN reported.

Regarding Manning, Al Jazeera reported a claim by former employee Charlie Sly that human growth hormone, HGH, was shipped to his house to his wife, Ashley Manning.

Al Jazeera’s Deborah Davies defended the report and its source Charlie Sly, ESPN reported. Davies pointed out that only a short portion of the documentary refers to Manning. “The only allegation in the program from Charlie Sly is that growth hormone was sent repeatedly from Guyer (Institute) to Ashley Manning in Florida,” Davies said to NBC. “We’re not making the allegation against Peyton Manning.”

Manning went on: “I think I rotated between being angry, furious. Disgusted is really how I feel, sickened by it. I’m trying to understand how someone can make something up about somebody, admit that he made it up and yet somehow it gets published in a story. I don’t understand that. Maybe you can explain it or somebody else can.

“It’s completely fabricated, complete trash, garbage — there’s more adjectives I’d like to be able to use. It really makes me sick,” Manning went on, commenting that “Any medical treatments that my wife receives, that’s her business.”

“That has nothing to do with me. Nothing that was sent to her and my wife has used have I ever taken. Absolutely not,” Manning said. “I have my treatments that I do. She may have hers, but that’s her business. There’s no connection between the two. I’d love to understand why this guy’s saying this, why he made it up, that he admits he makes it up and yet it still becomes a story. I’d like to be told and explained that.”

The Al Jazeera source, Sly, later said he “made up” the claims in an interview with Al Jazeera’s undercover reporter Liam Collins and that he “had never seen the Mannings ever” when he worked at the Guyer Institute. He said he also told Al Jazeera he faked the story and that he wasn’t at the institute when he said he was.

The Guyer Institute’s Dr. Dale Guyer said that Sly “was never an employee of the Guyer Institute and his brief three-month internship occurred in 2013 during which time Peyton was not even being treated or present in the office.” Guyer called the Al Jazeera report an invasion of privacy of Manning’s wife and a fabrication.

The transcript of Al Jazeera’s calls checking into Charles Sly is posted on Huffington Post.  In that, the institute said Sly did work there in 2011, when Manning was being treated at the clinic.

Ari Fleischer, a spokesman for Manning, said according to ESPN: “Al Jazeera is backtracking and retreating. Their story was not credible to begin with and it’s not credible now. Within 48 hours of the broadcast, Deborah Davies is now contradicting her own reporting.”