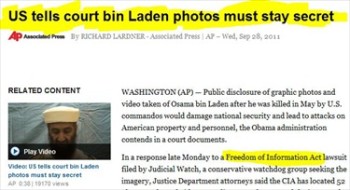 The AP and a group called Judicial Watch have each filed FOIAs calling for the release of photos of Osama bin Laden after he was killed. (Credit: Yahoo News, screenshot)

The White House is fighting a Freedom of Information Act lawsuit calling for the release of photos of Osama bin Laden’s death, Yahoo News reported.

According to Yahoo News, there are “52 photographs of videos that were taken of Osama bin Laden after he was killed.”

The Justice Department claims that publishing the photos “could incite  terrorism against American citizens” or could be used as propaganda. The CIA’s John Bennett also noted that the images are “quite graphic” and “gruesome.”  The lawsuit in question was filed by a “watchdog group” called Judicial Watch, but the Associated Press is also attempting to see the images.  According to the AP’s article, its FOIA request was “refused” but the AP has filed an appeal.