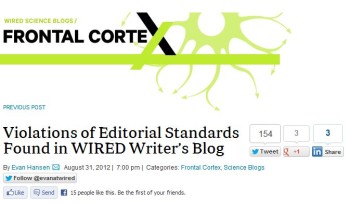 Wired reported that it has decided "sever the relationship" with Jonah Lehrer. (Credit: Wired, screenshot)

“Lehrer plagiarized others’ work, published inaccurate quotations, printed narrative details that were factually incorrect, and failed to address errors when they were pointed out,” Leife concluded in a report on his Wired review, published by Slate.

As we have previously written, Lehrer’s journalism ethics made the news in mid-June when the New Yorker added editor’s notes to five of his blog posts deemed to include “self-plagiarism” — or work he previously published in another outlet without disclosure.  Shortly after that, the New Yorker added a sixth editor’s note to Lehrer’s work noting that some information including “Noam Chomsky’s comments…were not made directly to Jonah Lehrer” but to Technology Review.  Lehrer apologized for his recycling, which he called “a stupid thing to do and incredibly lazy and absolutely wrong.”  Wired, where Lehrer was a contributing editor, said in June it would review Lehrer’s previous work for “lifted material,” Jim Romenesko reported.  In late July, Lehrer resigned from the New Yorker after Tablet magazine exposed fake quotes attributed to Bob Dylan in Lehrer’s book, Imagine.  In mid-August, Wired issued a statement noting that Lehrer was still a “contributing editor,” and that Wired was conducting a “thorough review of his feature stories and columns” and “so far…found nothing.”

In an article for Slate, Leife explained that Wired “asked me to take a look” at Lehrer’s work and that of the “18 out of several hundred postings” that he reviewed, “all but one piece revealed evidence of some journalistic misdeed.”   Accompanying Seife’s article was a chart documenting whether articles contained any of five following “journalistic infractions:”

According to Seife, he found in Lehrer’s work that “recycling was the norm” along with examples of a “light edit” of press releases, plagiarism, edited or mis-attributed quotes, and uncorrected errors.

Seife noted that the ethics of “recycling” work and press release plagiarism are debatable. (The New Yorker’s senior director of public relations Alexa Cassanos told iMediaEthics in June when Lehrer’s “recycling” was revealed that the New Yorker’s policy on self-plagiarism is “Writers shouldn’t recycle old material unless there’s good reason to do so, in which case it should be disclosed.”)  But, Seife, who noted he finds press release plagiarism unethical, argued:

“In Lehrer’s case, the extensive reuse of old material, coupled with his reliance on the appearance of novelty in his blog posts lead me to conclude that Lehrer crossed an ethical line with his recycling. Nevertheless, in my opinion, full disclosure, suitable penance, and a promise to sin no more would have been the appropriate response. Unfortunately for Lehrer, recycling was not the end of the story.”

Seife added that he “interviewed Lehrer for an hour and a half” about his review, but couldn’t report the results because “Unfortunately, in the setup to the interview, Wired.com, which set the ground rules for the interview, didn’t make sufficiently clear that the discussion was not solely part of an internal investigation and that it could be made public.”

“Editor’s Note: Some work by this author has been found to fall outside our Editorial standards. Not all posts have been checked. If you have any comments about this post, please write to research@wired.com.”

Wired itemized which blog posts have since been “annotated” and noted that it has ” found no issues to date with Lehrer’s magazine articles, which were subject to the usual thorough fact-checking process.”  Hansen added that the blog posts “were not edited or fact checked” and because of “Lehrer’s failure to meet WIRED editorial standards,” the magazine fired him.

We wrote to Hansen asking why Slate ran Seife’s full report instead of Wired,  if Wired will continue to review Lehrer’s work that Seife did not review, and for more information on why Seife couldn’t report his interview with Lehrer.  Hansen said he is “not going to add anything to our published statement at this time” and directed further inquiry to Wired’s “communications representative.”