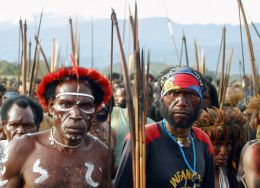 PACNEWS, the Pacific Island New Association's online publication erred in multiple ways when they ran an image of West Papua warriors to depict two Papua New Guineans and their libel lawsuit against The New Yorker and scientist and famed author, Jared Diamond.

Since it’s PACNEWS, the Pacific Island News Association’s online publication, you would think they, of all media outlets, would care about getting the information about two Papua New Guinean citizens right. But alas.

Their first mistake: They use an image of a tribe from West Papua, a different country–not Papua New Guinea. iMediaEthics recently reported that FP, Foreign Policy magazine used the same erroneous image for their article about the New Yorker libel case. When we wrote the them, poof, the image disappeared with no comment or correction. In this case, we wrote to PACNEWS too.

Editor Makereta Komai wrote back stating, “Thanks for bringing this to our attention. We will make the correction.” But nothing happened. The image still remains one week later.

Their second mistake involves their image selection. imediaethics asked in our earlier FP report: “Why did FP chose a traditional dress and war paint image– an ahistorical tribal depiction with no caption–to illustrate Mandingo and Wemp and their legal case?”

All the images depicting Wemp and Mandingo, widely available on the Internet, clearly depict Wemp and Mandingo as wearing western street clothes. So why did PACNEWS, like FP, also use the same image of stereotypical traditional warriors wearing fierce war paint and holding bows and arrows?

The third problem involves the Forbes’ content PACNEWS simply reprinted. The PACNEWS story states “SOURCE: FORBES/THE NATIONAL/PACNEWS.” Unwittingly, their sourcing credit line provides, not just the origins for their story, but the daisy chain of the continuing propagation of errors.

Forbes originally reported April 21: “Complicating Wemp’s case, perhaps, is an interview he gave to Shearer’s researchers, in Pidgin, stating that the stories he told Diamond were in fact true.”

Forbes made a partial correction– but it was too late. The misinformation was already launched in the bloggersphere and thereafter, propagates. Any attempts to correct, as this case illustrates well, are hit ‘n miss. Indeed, the misinformation passed from Forbes, to the PNG newspaper, The National, then on to PACNEWS, among many others. (We also informed Forbes several times that Isum Mandingo’s name, was incorrectly spelled. The court summons spelled it right; but Forbes misspelled his name Mandingo as “Mandigo” in their report anyway. To their shame, Isum’s name still remains misspelled on Forbes.com almost 2 full months after publication. One has to wonder: Would Forbes treat the misspelling of the chairman of General Motors in the same lax way? The answer is, of course, “no” Due to the propagation-effect, Isum’s name is also misspelled in PACNEWS, in The National and a litany of other media outlets that relied on Forbes content as accurate).

This propagation-effect is precisely why media errors, in the permanent and more easily retrievable record called the Internet, are much more dangerous than when old newspapers were only found in libraries and bird cages. Once the misinformation is out there on the net, even after corrections, it lives on, breeding, just like this misinformation about Daniel Wemp and Isum Mandingo.

One would hope that a publication that specializes in the Pacific region would have done its homework. Expectations naturally include that PACNEWS would be more racially sensitive than other media outlets about Islanders, and thus, would have avoided such racial stereotypes witnessed in their selection of the above photograph.

No doubt that the image PACNEWS selected falsely suggests that Wemp and Mandingo, the PNG men filing a US lawsuit, not only wear such traditional tribal dress, but furthermore, might even be traipsing into court displaying war paint and feathers.

We will write to PACNEWS again about their errors and update here, if and when we hear from them again.