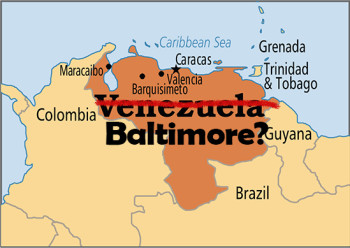 Memphis Fox-affiliate My Fox Memphis wrongly used a photo of fiery riots in Venezuela to depict the protests in Baltimore.

The station apologized on Facebook for its error, admitting it was a fact-check fail.

The Venezuelan photo was captioned, according to Snopes: “Baltimore in Flames: A massive fire has broken out in a building that was under construction and the Baltimore mayor’s spokesman says it’s related to the riots.”

“We messed up. As violent protests broke out in Baltimore Monday night a member of our team posted a photo of buildings burning and people rioting,” the station said in a Facebook apology.

“It wasn’t Baltimore. Our team didn’t fact check the picture the way we should have,” Fox Memphis admitted. “We know you depend on FOX13 for accurate information. We will work to hold ourselves to a higher standard as we post to this page.”

See the bogus photo below, via Gawker.

We messed up. As violent protests broke out in Baltimore Monday night a member of our team posted a photo of buildings…

iMediaEthics did a reverse Google image search of the photo. The original photo was published February 20, 2014 on Hollywood Life with coverage of the riots in Venezuela.  New York Times columnist Nicholas Kristof tweeted the photo Feb. 19, 2014.

iMediaEthics has written to My Fox Memphis for comment.

This, of course, isn’t the only time media coverage of Baltimore has been problematic.

Fox News retracted its May 4 claim that its staff saw Baltimore police shoot a black male in the back as he was running away. The police hadn’t shot anyone, despite Fox News’ claims. Shepard Smith apologized for the error, admitting “we screwed up.”

Two Buffalo, New York TV news stations suspended a host over his tweeted photo comparing the Baltimore protestors to monkeys climbing in and around a car.

And in Baltimore, a radio host was suspended for his Instagram post saying Gray “was pretty busy before he was unjustly killed” along with a list of charges against Gray.