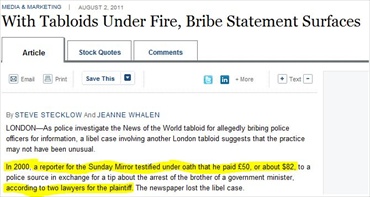 The Wall Street Journal reported that during a 2000 libel case, a Sunday Mirror reporter, Tim Luckett, reportedly admitted paying “about $82 to a police source in exchange for a tip about the arrest of the brother of a government minister,” The Wall Street Journal which noted “there is no trial transcript,” but cited “notes” from the attorney “who argued the case.”

Ronald Thwaites, a Mirror lawyer, reportedly told the Journal that he doesn’t have any “records” or “reference” of Luckett admitting to paying the police. Thwaites and another Mirror attorney “said they don’t recall the testimony,” according to the Journal.

Columbia Journalism Review’s Ryan Chittum noted that the Journal “utterly fails” to contextualize that alleged $82 payment with the reported “minimum £100,000 ($163,000) in bribes to police officials, according to the Guardian,” that News Corp’s News of the World is accused of paying police.

Chittum also slammed the Journal’s “awfully thin sourcing” to the “twelve-year-old notes” of an attorney and a second “attorney’s recollections.”  The Journal even noted in the story that there were no news reports on the reported revealed bribe payment.

“You’d think…the Journal could have tracked down someone else who remembers it, like, say, the judge or members of the jury,” Chittum commented.

And, Chittum noted that the Journal published its story before hearing back from former Mirror reporter Tim Luckett, who, post-publication denied having “ever paid a police officer for a story.”  Instead, he explained the $82 payment as to a source he couldn’t reveal in trial who “was not someone within the police service.”

Yesterday, Heather Mills claimed that she has been “told she was phone-hacking target,” BBC reported.

According to Mills, a Mirror journalist repeated a voicemail that was left on her phone by Paul McCartney.  Mills said former Mirror editor and current CNN host Piers Morgan wasn’t the Mirror reporter in question. However, Morgan has written about hearing a voicemail of Mills’, the BBC noted.

The Mirror’s parent company, Trinity Mirror, defended its journalist by saying again that “all our journalists work within the criminal law and the PCC [Press Complaints Commission] code of conduct,” the BBC reported.  Morgan again denied having phone hacked.

According to the New York Times, he was News of the World’s managing editor for 22 years.  He was questioned as part of the investigations into phone hacking and bribery at News of the World.

Jonathan May-Bowles, who threw the foam pie of shaving cream at Rupert Murdoch during his July 19 testimony in Parliament, pleaded guilty to assault.  On the day of the sentencing, he reportedly quoted Murdoch by saying “I would just like to say this has been the most humble day of my life,” the Irish Times reported.

According to the Daily Mail, he was sentenced to six weeks in jail.