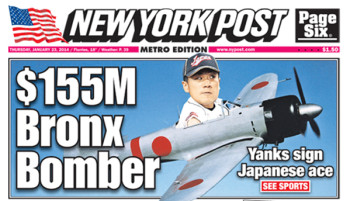 AAJA wants the New York Post to apologize over the above cover. (Credit: NYPost via Romenesko, screenshot)

The Asian American Journalists Association wants the New York Post to apologize for its “poor taste” in a front-page illustration suggesting Tanaka as a Zero aviator. Tanaka signed a $155 million contract with the New York Yankees last week.

The photo, used for the top half of the Post Jan. 23 edition, was also headlined “$155M Bronx Bomber.”

Zini previously had responded to AAJA’s complaint saying that the Post only published that image in “a very small number of papers” before realizing it “might be considered offensive.”  Zini’s earlier statement according to AAJA was:

“We recognized early on that an image intended to amuse and play off the Yankee nickname ‘Bronx Bombers’ might be considered offensive by some people, even though that was not our intention. Therefore, it was removed after a very small number of papers had been printed.”

Below see the cover that the Post ended up using.

The New York Post changed its cover after printing a “very small number of papers.” See the cover the post ended up using. (Credit: NYPost, screenshot)

However, AAJA said that was not enough. “We take you at your word that it was not the paper’s intent to offend,” AAJA said.  “However, when something that egregious is published, we believe it warrants a more direct apology.”  Further, AAJA reminded the newspaper of “past racism” against the Japanese.

“We’re sure you understand how hurtful and damaging stereotypes are. Seeing Tanaka, a Japanese national, depicted in such a way conjured up hateful imagery,” AAJA stated.

iMediaEthics has written to the Post‘s Zini for comment and to learn how many copies with the image in question were distributed, and will update with any response. We’ve also reached out to AAJA for further comment.

The AAJA is a “non-profit educational organization with more than 1,700 members in 21 chapters across the U.S. and Asia,” according to its website.