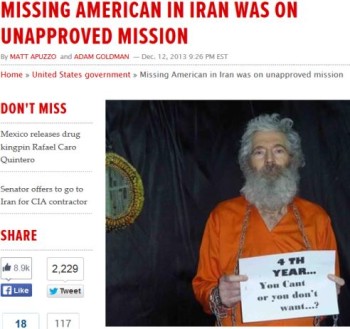 The AP reported (above) that Robert Levinson had CIA ties. (Credit: AP , screenshot)

Last month, the Associated Press reported that Robert Levinson, an American man who went missing in Iran in March 2007, wasn’t on a business trip but was actually working for the Central Intelligence Agency. Levinson “was working for the C.I.A. …  to gather intelligence from some of the world’s darkest corners,” the AP reported. “He vanished while investigating the Iranian government for the U.S.”

But numerous outlets, including the AP, had known about Levinson’s affiliation for years and agreed to not report on the CIA news at the U.S. government’s request. The New York Times revealed in a report that it found out about Levinson being on a CIA mission just months after his 2007 disappearance.

Gawker tracked three times where the New York Times published the wrong claim that Levinson was on a business trip. Also, Gawker reported that ABC News, which found out the CIA link around the same time as the Times, included the wrong “business trip” information “at least 7 times.”

White House spokesperson Jay Carney said the AP’s report on Levinson’s CIA relationship was “highly irresponsible,” USA Today reported. Further, National Security Council spokesperson Caitlin Hayden slammed the news service for reporting this information.  “Without commenting on any purported affiliation between Mr. Levinson and the U.S. government, the White House and others in the U.S. government strongly urged the AP not to run this story out of concern for Mr. Levinson’s life,” Hayden said in part.

So what changed, and what are the ethical implications?

Ed Wasserman, the Dean of the Graduate School of Journalism at the University of California and a longtime media ethicist, questioned “Where do the media get off exposing a spy?”

Wasserman argued that it was “clearly warranted” for the media to finally report on Levinson’s CIA ties.  He wrote for his website:

“Still, exposing a covert agent in the field has long been held out as the electrified third-rail of national security reporting—to be avoided at all cost—and it’s worth looking closer at this case to see an instance where publication was, I think, clearly warranted.”

But, as was made evident by the AP story, the media had to report the truth because it would just continue “misleading their readers, deliberately.” Wasserman wrote:

“First, let’s put the decision to expose Levinson in a journalistic context: The media’s other option was deceit. For years, each and every time the AP, The Times and other organizations that knew better described him as a private individual engaged in private inquiries—the cover story was that he was investigating cigarette smugglers—they were misleading their readers, deliberately.

“That’s lying. There may be times when it’s defensible—opinions differ among moral philosophers—but it’s never trivial, especially for journalists, to whom truthful discourse is a cornerstone duty.

“Was lying called for in this case—at a minimum, did the deception avert harm to Levinson? Maybe for a time, but to me, it’s unimaginable that after nearly seven years of captivity and untold days of questioning, Levinson’s CIA connections weren’t known to just about anyone who cared (apart from the U.S. public.)”

Why the AP decided to ID Levinson’s CIA link

The AP said in its report on Levinson that it decided to finally reveal the link between Levinson and the CIA because there have been no updates on his status. It explained:

“The AP is reporting the story now because, nearly seven years after his disappearance, those efforts have repeatedly come up empty. The government has not received any sign of life in nearly three years. Top U.S. officials, meanwhile, say his captors almost certainly already know about his CIA association.

“There has been no hint of Levinson’s whereabouts since his family received proof-of-life photos and a video in late 2010 and early 2011. That prompted a hopeful burst of diplomacy between the United States and Iran, but as time dragged on, promising leads dried up and the trail went cold.”

Why the New York Times Held Story from 2007

After the AP’s report, the New York Times published its own story about Levinson, disclosing that the Times has held back reporting on the CIA relationship for even longer than the AP.  The Times said it found out about the CIA connection based on information provided by a Levinson family lawyer but didn’t publish in the interest of Levinson’s safety.

The Times’ explanation from its Dec. 13 story:

“The New York Times has known about the former agent’s C.I.A. ties since late 2007, when a lawyer for the family gave a reporter access to Mr. Levinson’s files and emails. The Times withheld that information to avoid jeopardizing his safety or the efforts to free him. On Thursday, The Associated Press disclosed Mr. Levinson’s role with the intelligence agency. In a statement, the White House said it had urged the wire service not to publish its article ‘out of concern for Mr. Levinson’s life.’ After Thursday’s disclosure, the Levinson family said it had no objection to The Times’s publishing this article.”

“In this case, Ms. Abramson said, the reason for holding back the story was not because of a government request about national security, but in deference to Mr. Levinson’s family. “What caused us to hold the story was their profound worry that he would be killed.””

Sullivan noted that the Times did wrongly report until the CIA disclosure that Levinson was “on a business trip to Iran when he was captured.”  According to Sullivan, Abramson said that wrong reporting was “regrettable.”