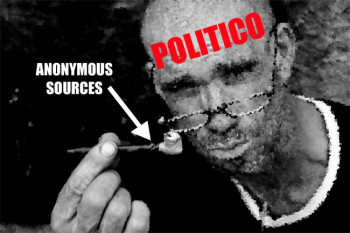 If anonymous sources are the crack cocaine of journalism, is Politico an addict? (Credit: Photo composite by London Shearer Allen; Photo by Marco Gomes on Flickr)

Politico, the Washington, D.C.-based political journalism organization, is notorious for using anonymous sources in its reporting and it has taken heat for it before. As Slate‘s David Weigel put it in his recent article Opening Act: Someone Save Politico From Itself, “The people who hate Politico do so because they think it allows anonymous sources to stir sh*t .”

Politico made some waves just last week when it published what has been described by many as a hit piece against New York Times executive editor Jill Abramson based on the complaints of more than a dozen anonymous sources who were purportedly current and former employees.

According to NPR’s ethics handbook, anonymous sources should be used rarely and only as a last resort.   Anonymous sources should be described “as clearly as you can without identifying them” and they “cannot make pejorative comments about the character, reputation, or personal qualities of another individual, or derogatory statements about an institution.” NPR’s guidelines dictate:

“We use information from anonymous sources to tell important stories that otherwise would go unreported. This is not a solo decision – the editors and producers of these stories must be satisfied that the source is credible and reliable, and that there is a substantial journalistic justification for using the source’s information without attribution.”

These guidelines are generally accepted and fairly standard across the industry, but Politico seems to hold to none of them.

iMediaEthics has rounded up some of the more blatant examples of Politico’s penchant for allowing sources to remain in the shadows. It is by no means an exhaustive list.

“I can’t recall any recent story so heavily reliant on anonymous sourcing. It’s a matter of concern for every journalist in this building,” said a White House reporter for a national newspaper chain.

If anonymous sources are in fact the “crack cocaine of journalism,” then it seems Politico and its reporters are badly in need of rehab.

In late 2012, Congressmen Justin Amash, Tim Huelskamp and David Schweikert were removed from their respective House committees because of (according to them) their voting record.

“But some of their colleagues say the trio got yanked by the leadership-driven Republican Steering Committee because they’re jerks — or worse. In an interview with Politico, one member of the Steering Committee called them ‘the most egregious a—holes’”

This anonymous source added no information or facts to the article, just an expletive.

3) Rick Perry Smack Down! In what can only be described as a comic interview, Politico’s Mike Allen asked then-Presidential hopeful Rick Perry about unrest in his campaign.

Allen said that “some of” Perry’s staffers had criticized the way his campaign had been run, to which Perry replied, “I don’t know who you are talking to, so I can’t respond unless you give me a name.”

All of Allen’s further attempts to question Perry along the same line were met with Perry’s repeated response — “You got a name?”

Perry then demonstrated some knowledge of journalism ethics when he explained to Allen, “If you don’t have a name to tell me, this individual said this, then I don’t take that as a corroborated source.”

4) The New Yorker and another Anonymous Source Double Down.  In Politico’s May 31, 2011 “Obama aides dismiss Seymour Hersh’s Iran” story, several (it is not clearly stated how many) anonymous White House sources are given a platform to attack a New Yorker article by Hersh that concluded Obama was overstating the threat Iran posed to the U.S..

“And a senior intelligence official also ripped Hersh, saying his article amounted to nothing more than ‘a slanted book report on a long narrative that’s already been told many times over.’”

The article goes on to further criticize Hersh “for his heavy reliance on anonymous sources” but does point out that “New Yorker editor David Remnick has repeatedly said he stands by his reporter’s work.” Luckily, Jennifer Epstein, who wrote this article riddled with anonymous sources for Politico, appears to have an equally trusting editor.

5) You win some? Politico has had well known successes that used anonymous sources.

In 2011, Politico broke the news based on anonymous sourcing that presidential candidate Herman Cain had at least two complaints of sexual harassment in his past, which had been settled.

And it panned out — mostly.

However the original reporting and choice to publish was criticized. ProPublica pointed out that the article, and therefore Politico’s sources, lacked the answers to two important questions.

What was Cain accused of doing? Politico’s article is very vague, stating Cain made “physical gestures that were not overtly sexual” and “conversations allegedly filled with innuendo.”

And how much money were the two women paid in settlement? Politico said it was in the “five figure range.” ProPublica points out that the meaning of a $99,999 settlement is very different from a $10,000 one.

6) You lose some. On March 22, 2007, Ben Smith, at the time a journalist/blogger for Politico (currently the editor of BuzzFeed), got burned by a source. Smith posted a hot tip on his blog claiming that John Edwards was about to suspend his presidential campaign.  The problem? It wasn’t remotely true.

In his online apology, Smith blames the error on his failure to seek confirmation with another source.  However, he doesn’t seem to question his choice of granting anonymity to his source in the first place. Perhaps if the source was named in the first place, he or she would have been more careful before passing along a rumor to reporter.
7) When writing a hit piece, how many sources are enough? For the recent Jill Abramson hatchet job, the answer was more than a dozen, but it seems that if you are going after the at-the-time GOP vice presidential nominee, Paul Ryan, the standards are a little higher.

In August 2012, Politico published an article filled with opinions that came from “more than three dozen interviews with Republican strategists and campaign operatives.” The unnamed Republican insiders are described as feeling “gnawing apprehension to hair-on-fire anger” over the tapping of Ryan as Romney’s running mate. Although the criticism is decidedly muted, purported concerns that Romney “ceded the election” and that Ryan “is a disaster” and “isn’t ready to be president” were undoubtedly damaging.

Politico continuously allows anonymous sources to provide opinion, not fact. The standard in journalism for using anonymous sources is to give a source anonymity only “when they provide vital information – not opinion or speculation” according to Associated Press’s policy. The New York Times’ policy explicitly bans personal attacks stating; “We do not grant anonymity to people who use it as cover for a personal or partisan attack.”

Just as in the Abramson article, Politico let both women be labeled “condescending” by their anonymous underlings.  While Boxer was found to be “testy” and “abrasive,” Abramson was declared “stubborn” and “brusque.” The personality flaws of both successful women seem to be their downfall: Boxer’s “personal style helped tank the climate bill,” and Abramson is “on the verge of losing the support of the newsroom.”

The anonymous staffers believed Boxer’s behavior “underscored the danger of having an outspoken partisan liberal in charge.” But it is her personality that seemed to be the issue, not her ideology, according to Politico’s sources.

9) Who is your source anyway?  Generally anonymous sources are gussied up with titles in an attempt to lend credibility to the source. Glenn Thrush’s recent article on new Obama chief of staff Denis McDonough has numerous examples: “a senior White House official” and “one senior Democratic aide in the Senate.”

Sometime there is no title available and general descriptions are used. Thrush frequently refers to “people close to McDonough” as the source of the opinions in his article.  One source Thrush quotes is simply “the person” who is supposed to be an “Obama confidant.” In the hierarchy of anonymous sources is it safe to assume that a “confidant” is more reliable than just being “close to” someone but not quite as good as a “senior official” ?

10) A political newspaper or a gossip column?  In this 2010 poitical gossip article, Glenn Thrush describes the story as “a nasty battle of the blind quotes…between the West Wing and Democratic leadership aides.”  There isn’t a single named source. The players are as follows:

We don’t know who any of those sources are, but it is apparent that they are all quite outraged by everyone else’s anonymous attacks.

Bruce Schulman’s opinion article The cost of crossing the president starts his article with a question and two anonymous White House sources that purportedly answer it;

“Will the White House punish Democrats who defected on the monumental health care overhaul?

‘There is not a whole lot of [President] Barack Obama and [Vice President] Joe Biden to spare on a good day,’ one senior White House official told POLITICO. ‘We’re going to have to focus on our friends.’

As for the five House Democrats who reversed their positions to vote against the final bill, another Obama aide said, ‘We appreciate the people who hung with us.'”

The message was intended for the Democrats who failed to support Obama’s health care reform and possibly others who might consider defecting in the future.

The article goes on to discuss how presidents, namely Obama and FDR, apply pressure to Congress to secure cooperation.  Schulman mentions that presidents must be careful to avoid “the impression that they are interfering on congressional prerogatives or voters’ preferences” yet he seems to be unaware of the part he plays by giving the anonymous source a platform.

Schulman is giving the White House a platform to “pressure Congress” and also gives them anonymity that helps them avoid “the impression that they are interfering.” Therefore Politico is allowing the White House (and other politicians and groups in other articles) to forward their agendas through the use of anonymous sources. If the source was named the reader could better judge the value and the information and the motivation of the person.