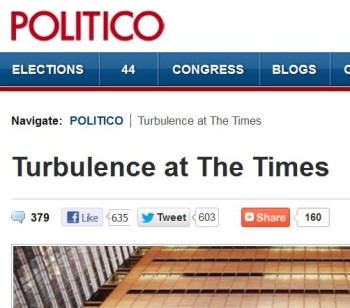 Dylan Byers of Politico has written a bizarre hatchet job of New York Times executive editor Jill Abramson.  Apparently, she is a bitch, at least according to not one but “more than a dozen current and former members of the editorial staff, all of whom spoke to POLITICO on the condition of anonymity.”  Although no one is directly quoted as calling her the B-word, the implication is pretty clear. She is described as “stubborn and condescending, saying they found her difficult to work with” and as perceived as a “bitchy woman.”

Articles that attack individuals based on rumor and anonymous sources are usually deservedly banished to the pages where the gossip column are stashed, but Politico decided to feature the 1,700-word attack on its homepage.

It is an accepted standard to never use anonymous sources to attack someone, and for good reason. The Associated Press’s policy says they give a source anonymity only “when they provide vital information – not opinion or speculation” and the New York Times’ policy is “We do not grant anonymity to people who use it as cover for a personal or partisan attack.”

USA Today founder Al Neurharth, who died a few days ago, decried anonymous sources in general, describing them as the “root of all evil in journalism.” He explained why they are so bad:

“It’s so simple. Most anonymous sources often tell more than they know. Reporters who are allowed to use such sources sometimes write more than they hear. Editors too often let them get away with it. Result: Fiction gets mixed with fact.”

It is not difficult to find people with an axe to grind about their boss especially in a large organization like the Times. Since when is someone (or in this case more than a dozen someones) hating their boss a newsworthy story?

iMediaEthics wonders how Byers found so many disgruntled sources?  Did they recommend each other or were they found independently?

Compounding the problem, Byers even publishes rumors where anonymous staffers report secondhand about things that they didn’t even witness themselves.

“‘Every editor has a story about how she’s blown up in a meeting,” one reporter said.

The only source who went on the record — besides the official statement from the New York Times — defended Abramson:

“[Dean] Baquet, who spoke positively of Abramson and of their relationship, acknowledged these frustrations but didn’t lend them much credence. ‘I think there’s a really easy caricature that some people have bought into, of the bitchy woman character and the guy who is sort of calmer,’ he said. ‘That, I think, is a little bit of an unfair caricature.’”

The sexist double standard that Baquet alludes to is never discussed by Byers, despite its importance to the subject of the article.

Baquet, who is Managing Editor of News Operations for the New York Times, fares much better in the article, He is described as caring about “newsroom morale” and “being liked” by what one assumes are the same anonymous staffers who criticized Abramson.

Baquet is heaped with praise despite a reported history of violent outbursts when angered:

“As Washington bureau chief, he got so upset when a story didn’t make the front page that he drove his fist through the wall. (‘I never lose my temper at a person,’ he said. ‘I lose my temper at walls.’) But even this anecdote is recalled fondly.”

Byers directly compares Abramson and Baquet. Yet Byers does not explain why he is doing so. He wrote, “If Abramson is disengaged, Baquet is just the opposite” and “Increasingly, it is Baquet, not Abramson, to whom staffers turn.”

Is Baquet lobbying for a promotion? Is Byers anticipating a coup at the New York Times?

Given this, one has to wonder where this story came from and what are the larger implications?

UPDATE: 2:30 PM   iMediaEthics contacted Byers asking how he had gathered so many anonymous sources.  Byers told iMediaEthics in what can only be descibed as a succinct email “I called them.” (This was his entire email).  iMediaEthics replied with follow up questions:

1) But how did you know who to call?  Did you use the NY Times directory and start at the letter A and work alphabetically until you reached more than a dozen? (how many more than a dozen was it anyway?)

2) It was 12+ out of how many? Did any sources have a different opinion or decline to share their views?

We are waiting for a response and will update if we receive any answer.