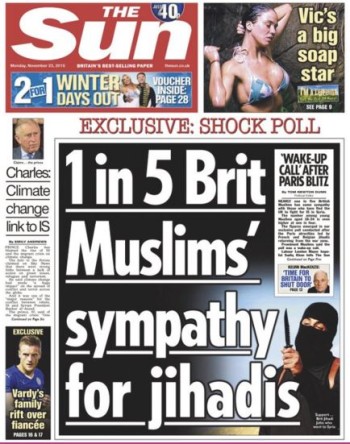 More than 1,200 people have complained about the UK Sun‘s cover story, “1 in 5 Brit Muslims’ have sympathy with ISIS.”

“I can confirm that, as at 1300 this afternoon, IPSO has received more than 1,200 complaints relating to yesterday’s Sun front page, the majority which relate to Clause 1 (Accuracy) of the Editors’ Code of Practice,” IPSO said in a statement sent to iMediaEthics.

The number is the most that IPSO, the Independent Press Standards Organisation, has ever received, the Mirror noted.

Why were readers so upset? Because the poll it cited “did not mention ISIS or jihadis,” according to the Mirror. “It referred to ‘fighters in Syria’. The problem with that was there’s a vast array of groups fighting in the war-ravaged nation. Many of them are Islamic and most of them see ISIS as the enemy.”

The Sun claim about 1 in 5 sympathizing with jihadis in Syria came from the question “I have a lot of sympathy with young Muslims who leave the UK to join fighters in Syria.” The Guardian pointed out that the question actually could include people going to fight against ISIS and that just 5% asked said they had “a lot of sympathy,” with about 15% having “some sympathy.” Further, 71.5% had “no sympathy,” the Guardian noted.

The Guardian noted that the survey sample is in question as well: “The splash and story inside the paper are based on a telephone poll carried out by Survation last week. It is not clear how the British Muslims were sourced, and how far the sample Survation used can be deemed to be representative of the overall group.”

See tweets about the poll below:

When asked for comment about the criticism of the poll report, the Sun, owned by News Corp., sent iMediaEthics its column on the report. The Sun stood by its reporting, writing “It is depressing too that many others would rather not face up to [the Sun‘s claims] rather than deal with what it uncovered.”

The Sun went on: “Most of our survey, commissioned after the Paris atrocities, probed Muslims attitudes to IS specifically. No one agreeing to the statement ‘I have a lot of sympathy with young Muslims who leave the UK to join fighters in Syria’ was in any doubt which fighters we meant.”

Read the Sun column below.