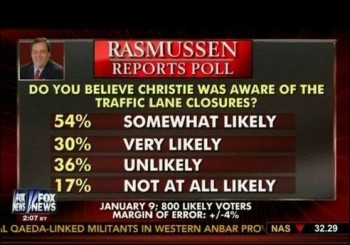 A screenshot of the error (Credit: Media Matters Tumblr, screenshot)

A Fox News graphic for the results of a Rasmussen poll on Chris Christie suggests that 137% of New Jerseyians have an opinion about their governor.

The graphic, shown above via Media Matters’ Tumblr and confirmed as authentic by iMediaEthics, reports on Rasmussen’s finding of public response to Bridgegate — the closures of lanes at the George Washington Bridge allegedly as retaliation against the mayor of Fort Lee, New Jersey.  The exact wording of the poll question (excluding the possible responses) was:

“How likely is it that Governor Christie was aware at the time that traffic lanes onto the George Washington Bridge were being closed as retaliation against the mayor of Fort Lee for refusing to support Christie’s reelection?”

For context, see below video of Fox News’ report by Gretchen Carlson on the Rasmussen poll:

When combined, the total percentage listed by the Fox News graphic is 137%: 84% said it was (very, or somewhat) likely that Christie knew about the lane closures, while another 53% said it was unlikely or not at all likely. So how can there be 137% of NJ folks expressing an opinion?

Rasmussen Reports, which conducted the poll, could have contributed to this confusing conclusion. Fox News seems to have cherry-picked its statistics from the following paragraph from the Rasmussen Reports article (emphasis added):

“A new Rasmussen Reports telephone survey finds that 54% of Likely New Jersey Voters believe it’s at least somewhat likely that Christie was aware that traffic lanes onto the George Washington Bridge were being closed as retaliation for the mayor of Fort Lee’s refusal to support the governor’s reelection. Thirty-six percent (36%) think it’s unlikely Christie was aware beforehand. This includes 30% who say it’s Very Likely he was aware and 17% who say it’s Not At All Likely.”

Rasmussen Reports’ general manager Beth Chunn told iMediaEthics regarding the Fox News report: “Neither the interview nor the graphic were coordinated through Rasmussen Reports, and we addressed the issue with Fox News as soon as it came to our attention. It appears it was a misinterpretation of the numbers based on an alert that was sent out via e-mail.”

iMediaEthics went to the Rasmussen Reports website to find out what the exact response was to the poll. But, we quickly hit a dead end.

While the methodology and poll report summary are available, the website requires a “Platinum Service” subscription to access the poll’s toplines, which breaks down responses to questions by percentages.

According to Rasmussen Reports’ website, that “Platinum Service” subscription costs $19.95 a month, or $199.95 a year. To make sure we weren’t missing something, we reached out to Rasmussen for more information.

Standard polling industry ethical standards, such as the code of ethics of the American Association for Public Opinion Research, require that polling organizations reveal to the public “The exact wording and presentation of questions and responses whose results are reported.” Clearly, Rasmussen’s policy of releasing the full question wording and responses only to news organizations upon request, or only to its Platinum members, does not meet the ethical standards subscribed to by quality polling organizations.

We’ve asked Rasmussen Reports for a response about its lack of compliance to this industry standard and will update with any response.