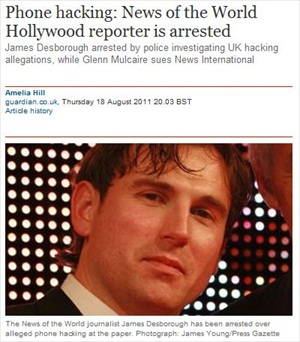 The Guardian reportedly broke the story of James Desborough's arrest before it even happened. (Credit: the Guardian, screenshot)

Another former News of the World reporter, James Desborough, has been arrested, the Guardian reported.

According to the Guardian, he is being looked at under the phone-hacking investigation.  Desborough’s work in the UK is in question, although he did work in the U.S. as the newspaper’s Los Angeles editor two years ago.

Desborough’s arrest is the 13th under the phone hacking scandal, the Guardian reported.  He is “the most junior journalist” arrested so far.

However, that arrest was reported by the Guardian “before it had even taken place,” according to Press Gazette.

Press Gazette reported that the UK police have arrested their own detective, an unnamed 51-year-old detective constable, “on suspicion of misconduct in a public office relating to unauthorised disclosure of information.”

Former News of the World private investigator Glenn Mulcaire has filed a lawsuit against News International, the Guardian reported.

The company had been paying Mulcaire’s legal fees in a fight against Mulcaire’s naming other News of the World employees who knew of or used phone hacking.  James Murdoch revealed that the company was still paying his fees during a July 19 Parliament testimony.  He agreed to stop payment and announced it had stopped paying the fees in July. Mulcaire’s attorneys later sent a letter to News International about the stop payment.

According to the Guardian, the company has spent “approximately £246,000” on attorney fees for Mulcaire.  Mulcaire’s lawsuit is to get the company to pay his fees.

Yates will be investigated by the commission to learn if he got a job for the daughter of former News of the World journalist Neil Wallis, though.  Yates stated in response in part: “I strongly deny any wrongdoing,” according to Yahoo News.