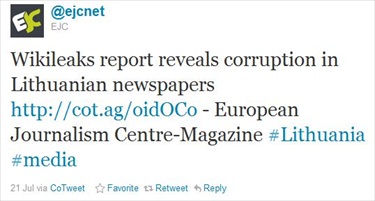 For example, Algirdas Sysas, a member of the Lithuanian Parliament, is quoted by the EJC as saying he’s “heard” of politicians being offered the opportunity to pay a bribe for good coverage.  And, former Lithuanian prime minister adviser, Vilius Kavaliauskas, is quoted as saying that “In Lithuania, one must buy the right not to be attacked in the media.”

The owner of Respublika, Vitas Tomkus, however denied the allegations and claimed that they “originate from the United States Secret Service, who is trying to push out from the market the only national daily newspaper published by a Lithuanian-capital company and bring in instead foreign-capital media owners who strongly back American policies,” the EJC reported.

Tomkus criticized Afterposten, which published the cable, and the U.S. embassy, claiming they both “libeled Respublika by publishing an unsubstantiated article without even seeking our comment first.”  StinkyJournalism wrote to Respublika seeking comment but haven’t had any response.

The second newspaper accused of unethical practices, Lietuvos Rytas, didn’t comment on the claims beyond calling the cable a “petty piece of paper written by an undisclosed person with unclear intentions”, according to EJC.

The WikiLeaks cable in question is posted here on Norweigen news site Aftenposten.  It states it originates from the Vilnius Embassy and is classified by Damian Leader.

iMediaEthics searched WikiLeaks’ site, but couldn’t find the cable published there. But, according to WikiLeaks, only 19,703 of 251,287 cables have been published as of yet so the cable may still be published through WiklLeaks as well. In December 2010, Aftenposten announced it had been leaked the full set of cables.

iMediaEthics wrote to the U.S. Embassy in Vilnius seeking comment and confirmation of the cable.  The embassy’s counselor for public affairs, Jon Berger, told iMediaEthics that “we can’t comment on any alleged cables that came out of the WikiLeaks issue, and in fact, we strongly condemn these kinds of leaks overall.”