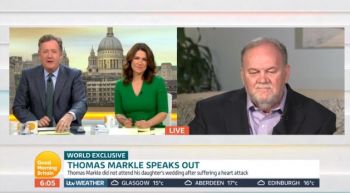 A screenshot from the interview of Thomas Markle.

“The TV crew flew the 73-year-old to a luxury hotel in California from his home in Mexico for the interview,” according to News.com.au.

Piers Morgan, who with Susanna Reid interviewed Markle for ITV’s Good Morning Britain, downplayed the payment, which is widely considered a journalistic ethical breach. Morgan told entertainment site ET about the payment, claiming “Well, it was a small amount of money, a few thousand pounds. He was offered stratospherically lots more money by different media organizations. He could’ve made a lot more money doing what he wanted to do.”

“It wasn’t about money for him, you can tell that. The real motivation was setting the record straight, having his say,” Morgan is quoted as saying.

iMediaEthics has written to ITV to ask more about its payment to Markle, including to ask if it disclosed the payment in the interview.

Morgan was fired in 2004 from the Daily Mirror, where he was then editor, after it published fake photos of British troops torturing Iraqis. The Mirror has admitted to publishing stories based on phone hacking, but Morgan denied being involved in hacking.