2,600 Complaints over Sun’s Claims 1 in 5 Muslims Sympathize with ISIS, Times of London Corrects 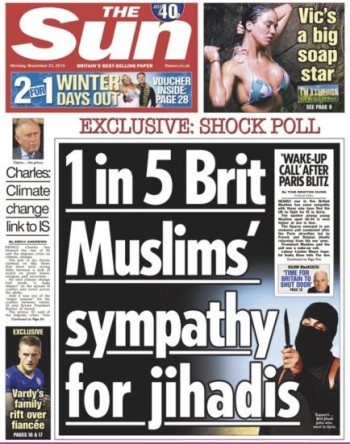 The Sun‘s front-page story claiming 1 in 5 Muslims “sympathizes” with ISIS has prompted a record 2,600 complaints to the UK press regulator the Independent Press Standards Organisation.

In a press statement sent to iMediaEthics, IPSO said:

“IPSO’s policy when dealing with a large number of complaints about a particular issue that requires investigation is to select a lead complaint. In this case, IPSO has selected MEND (Muslim Engagement & Development) as the lead complaint. We have written to The Sun to inform them that we have commenced an investigation into this matter.

“As of this morning, Thursday 25th November, IPSO has received around 2,600 complaints relating to the article. The majority of these refer to Clause 1 (Accuracy) of the Editors’ Code of Practice. Each correspondent will have their complaint logged and will be informed of the decision to select MEND as the lead complaint. IPSO will notify all complainants of the outcome of the investigation.

“While the matter is ongoing, IPSO will not make any further comment on the case.”

The Sun previously defended the poll and its interpretation, as iMediaEthics reported earlier this week. The polling company that conducted the poll, Survation, criticized The Sun‘s interpretation of its results.

However, The Sun‘s sister newspaper, the Times of London, published a correction admitting the poll was “misleading,” according to The Guardian.

“We reported the findings of a Survation poll of 1,000 British Muslims… Asked ‘How do you feel about young Muslims who leave the UK to join fighters in Syria?’, 14% of respondents expressed ‘some sympathy’ and 5% ‘a lot of sympathy’.

“The survey did not distinguish between those who go to fight for Islamic State and those who join other factions in Syria, and it did not ask about attitudes towards Isis itself. Our headline, ‘One in five British Muslims has sympathy for Isis’, was misleading in failing to reflect this.”

The Guardian noted that The Sun usually uses YouGov to conduct its polls but YouGov didn’t want to conduct the poll The Sun wanted on Muslims’ sympathizing with ISIS. YouGov told The Guardian: “To survey Britain’s Muslim population, particularly at a time of such heightened sensitivities, requires the kind of time, care and therefore cost that is beyond a newspaper’s budget.”

2,600 Complaints over Sun’s Claims 1 in 5 Muslims Sympathize with ISIS, Times of London Corrects