Fear-Mongering on Muslims’ Views of ISIS 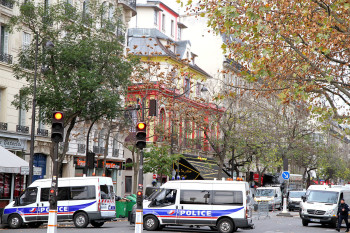 The Bataclan Theatre in Paris the day after the attacks earlier this month. (Credit: Wikipedia/ Maya-Anaïs Yataghène)

In the wake of the Paris attacks, there has been a resurgence of anti-Muslim demonstrations in the United States and Europe. The public’s perceptions of Muslims as possible supporters of ISIS, the group that claimed responsibility for the bombing and numerous other violent acts, have been reinforced by what appear to be deliberate misinterpretations of polling results.

Poll for The Sun

As already noted on this website, the British newspaper, The Sun, earned 1,200 complaints about one of its poll stories that claimed “Nearly one in five British Muslims has some sympathy with those who have fled the UK to fight for IS in Syria.” One problem: The poll didn’t mention IS (or ISIS), but merely asked: “How do you feel about young Muslims who leave the UK to join fighters in Syria?”

Fighters in Syria include those opposed to ISIS, as well as those supporting ISIS, and the poll question did not try to clarify whether the sympathy was for one or the other.

Another problem: We don’t really know how respondents interpreted “sympathy” in the question. Feeling sorry for someone doesn’t necessarily indicate support for their actions. In fact, it could be some people feel sympathy for a person going off to fight because that person is especially vulnerable to getting killed. One question about complex feelings doesn’t really provide much insight into the issue.

A related problem: The pollster, Survation, noted in its report of the November survey of Muslims that the same question asked of British non-Muslims last March, revealed similar results. 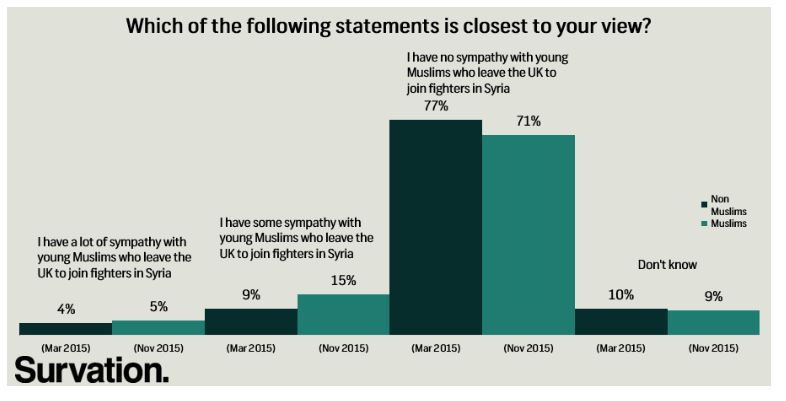 Those small differences between Muslims and non-Muslims are well within the polls’ margins of error. And they highlight the difficulty in interpreting what “sympathy” for those fighters actually means. When non-Muslims say they have sympathy for young Muslims going to fight in Syria, can we reasonably interpret those responses as indicating support for ISIS? Not very likely.

So, we have to be careful in making that same interpretation of Muslims as well.

Despite the protests against its article, The Sun stands by its misinterpretation. That suggests a deliberate effort to distort results, rather than just an innocent oversight.

Last spring, Pew conducted a poll in several Muslim countries that asked, among other questions, whether Muslims had a favorable or unfavorable opinion of ISIS. Pew’s chart of the results had the headline: “Views of ISIS overwhelming negative.” 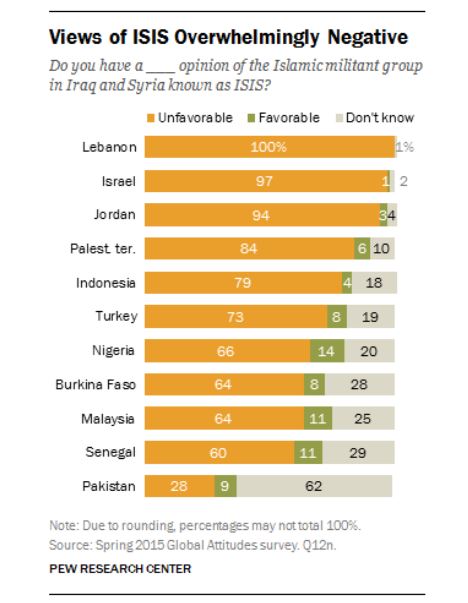 On PunchingBagPost.com, which bills itself as presenting “a conservative perspective,” the report of the Pew poll removed the Pew headline and added one that provided the opposite conclusion: “Pew Polls Reveal Shocking Support for ISIS.”

I hasten to add that whether one is conservative or liberal or somewhere in-between, poll results should be characterized as accurately as possible. Interpreting results is not simply a matter of viewing them through one end or the other of an ideological lens.

While Pew noted, for example, that “In no country did more than 15% of the population show favorable attitudes toward Islamic State,” PunchingBagPost asserted that “nearly 15% of the Muslim population in 11 representative nation-states looks favorably on ISIS.” (The actual percentages are shown in the chart above – and do not support the latter conclusion.)

PunchingBagPost also noted, “In Pakistan, a whopping 62% of those polled looked favorably on ISIS.” As the chart reveals (the same chart posted on PunchingBagPost), the 62% figure applies to people who expressed no opinion – not to those who expressed favorable feelings. In fact, just 9% fit that category – a small fraction of what the article erroneously asserted.

It’s not just a matter of a glass half full or half empty. The proportions are lopsided against positive views of ISIS. But the website seems determined to present a more frightening view.

The site goes on to scare the reader by multiplying the percentages by the population size to suggest that “at least 63 million people in those 11 nation-states support ISIS.”

Note that this conclusion changes the sentiment from a vague “favorable” measure used by Pew to a “support” measure that implies much more than simply a feeling.

As the chart below makes clear, even that vague feeling is not especially strong. The percentages of people who feel “very favorable” are quite small, with only one country exceeding 4% in this category.

Anyway, having suggested that tens of millions of Muslims “support” ISIS, the article then goes on to suggest there are actually “hundreds of millions of people in the world who do support ISIS.”

How did the article get from 63 million to 287 million? It included all those people who said they “don’t know” when asked the question about ISIS. So, if a Muslim didn’t know anything about ISIS, that means – according to PunchingBagPost – that the person “supports” ISIS. That conclusion is simply not tenable.

Actually, it’s quite possible that many people who answered the question with either a “favorable” or “unfavorable” response didn’t really know much about ISIS itself. Their responses may have been triggered more by the description of “Islamic militant group in Iraq and Syria,” than by the word ISIS or by the actual actions that ISIS has taken.

Not examined is how much respondents even knew what ISIS was doing. Again, this demonstrates how difficult it is to derive meaning about public opinion on a complex subject with just one question.

The Pew question was apparently “forced-choice” – which means there was no explicit “don’t know” option offered. Instead, it appears that the respondent had to volunteer that he or she didn’t know enough about the issue to give an opinion specifically about ISIS. This format drastically underestimates the actual number of people who really don’t have an opinion.

In both cases noted here, in the report by The Sun on the Survation poll and the report by PunchingBagPost of the poll Pew conducted, the intent seems more to scare people than to inform. Given the anti-Muslim sentiment already evident in demonstrations and other violent acts against Muslims, such scare tactics by the media need to be condemned.

Fear-Mongering on Muslims’ Views of ISIS