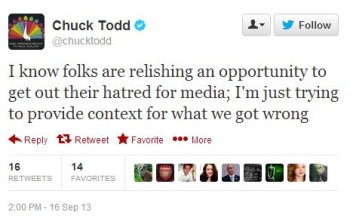 CBS News, NBC News and the Associated Press erred or had measurable issues with their reporting on the shootings. iMediaEthics counted three major missteps.

CBS and NBC wrongly identified the shooter, according to Mediaite, which captured an errant tweet from NBC’s Chuck Todd. Todd was re-tweeting NBC’s Senior Executive Producer for NBC News Investigative Unit Richard Esposito saying the shooter was “a Rollie Chance.”

The confusion over the suspect’s name comes from conflicting law enforcement sources. That’s why we pulled back.

The confusion over the shooter name had to do with an I.D. card found near dead gunman; What led to bad initial reporting.
— Chuck Todd (@chucktodd) September 16, 2013

Later, Todd tweeted other excuses for why Chance was mis-identified as the shooter.

More on the I.D. confusion of gunman, @PeteWilliamsNBC reporting I.D. found near dead gunman was badge gunman may have used to get into bldg
— Chuck Todd (@chucktodd) September 16, 2013

“I know folks are relishing an opportunity to get out their hatred for media,” Todd wrote. “I’m just trying to provide context for what we got wrong.”

In sharp ethical contrast, CNN held off on reporting the name of the suspect until the FBI confirmed “on the record,”the Washington Post’s Erik Wemple reported. Wemple suggested CBS News and NBC News should have “followed that prescription earlier in the day.” Wemple also reminded readers about similar errors in reporting on the Newtown, Connecticut school shootings.

Numerous news outlets including NBC News, the Associated Press and CNN wrongly reported that Ryan Lanza was the shooter in Newtown, Connecticut, as iMediaEthics wrote back in December. However, the police later identified Lanza’s brother, Adam Lanza, as behind the shooting.

“The script followed by the media during the coverage of the shooting at the Navy Yard in Washington is an all-too-familiar one,” Mirkinson wrote.

Silverman pointed to possible trouble spots in reporting: “Maybe it’s a misidentification of a suspect, or a victim, or a location. Maybe people got the fundamental facts wrong. Who’s dead? How many shooters are there?”

Meanwhile, the Associated Press retracted two photos after about six hours, according to Poynter.  In a “photo elimination” notice, the AP said

“THE ASSOCIATED PRESS HAS BEEN UNABLE TO CONFIRM THAT THE INCIDENT SHOWN IN THIS PICTURE IS DIRECTLY CONNECTED WITH THE SHOOTINGS AT THE NAVAL YARD IN WASHINGTON.”

One of the photos, re-published by Poynter, appears to show one person lying on the group with a few people leaning over.  In the background is a CVS and what appears to be two people in uniform. The picture seems to have been taken from a car window.

iMediaEthics has written to the AP asking where it got the photos and what the AP has determined concerning what the photos actually show. We’ll update with any response.

Number 3: How many shooters were there?

Police now believe there may be TWO shooters. One down, searching for second. http://t.co/45QiKSoWw6

The Washington Post’s Paul Farhi already wrote about numerous errors in media reporting on the shootings.

“So much was misreported in the first few hours after the shooting rampage at Washington’s Navy Yard,” Farhi commented, adding that “initial reports said that as many as three gunmen were involved.” However, he left out that his own newspaper had also reported the three gunman information.

iMediaEthics has written to the Post asking if it has published any corrections in print or online related to its reporting on the Navy Yard shootings. We’ll update with any response.