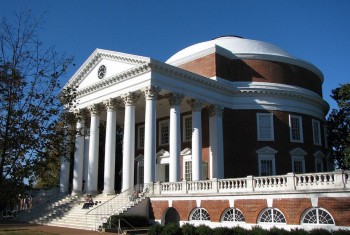 The Rotunda at UVA (Credit: Wikipedia)

Another lawsuit  has been filed against Rolling Stone over its “Rape on Campus” story by Sabrina Rubin Erderly.

Three Phi Kappa Psi fraternity members who graduated from the University of Virginia are suing the magazine, its publisher Wenner Media and Erderly for libel and negligent infliction of emotional distress, the Associated Press reported.

The November 19, 2014 story by Erderly detailed an alleged gang rape of a student named Jackie by seven Phi Kappa Psi fraternity members. But after numerous questions were raised about the story post-publication, Rolling Stone apologized and admitted it never contacted the accused rapists.

Rolling Stone had Columbia Graduate School of Journalism investigate the story, and after that investigation was completed, the magazine retracted the story. The investigation found it to be a “a story of journalistic failure.” Despite that, no one at the magazine was immediately fired. The Charlottesville, Virginia police also investigated the claims in the Rolling Stone story and said there was “no evidence” or “sufficient facts” backing the story, the Washington Post reported at the time.

The article “created a simple and direct way to match the alleged attackers” with the three plaintiffs, George Elias IV, Stephen Hadford and Ross Fowler, the lawsuit said, according to the AP. As a result, they received “vicious and hurtful attacks.” In addition, their names were linked to the article and rape claims online.

For example, “Upon release of the article, family friends, acquaintances, co-workers and reporters easily matched (Elias) as one of the alleged attackers and, among other things, interrogated him, humiliated him, and scolded him,” the lawsuit states.

Dana “is not leaving for another job, and his successor has not been named,” the Times reported. “When asked if the departure was linked to the controversy over the discredited article, Rolling Stone‘s publisher Jann S. Wenner, said, via a spokeswoman, that ‘many factors go into a decision like this.”

In May, UVA associate dean of students Nicole Eramo filed a lawsuit against Rolling Stone claiming the article made her the “chief villain” and “destroyed her credibility, permanently damaged her reputation and caused her emotional distress,” as iMediaEthics previously reported.

UPDATE: 7/30/2015 4:56 PM EST Rolling Stone declined to comment on the lawsuit and provided its press release on Dana “stepping down.” The press release says Dana started working for Rolling Stone in 1996 and was named managing editor in 2005. It quotes Jann Wenner calling him “one of the finest Editors I have ever worked with.”