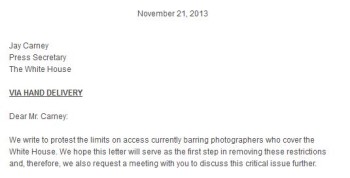 A screenshot of the letter protesting journalist access to the President. (Credit: ASNE.org, screenshot)

The letter requested the White House give more access to take pictures or video of Obama during public matters. The letter reads, in part:

“Journalists are routinely being denied the right to photograph or videotape the President while he is performing his official duties. As surely as if they were placing a hand over a journalist’s camera lens, officials in this administration are blocking the public from having an independent view of important functions of the Executive Branch of government.

Contradicting the excuses against access that are given to the press, the letter argued if the White House press photographer is allowed to take footage, the press should too.

The new policy for McClatchy was laid out in an e-mail from its Vice President for News/Washington Editor Anders Gyllenhaal, published on the Poynter website. Gyllenhaal wrote:

“The editors of McClatchy newspapers have agreed not to publish photography issued by the White House as part of a follow-up to concerns raised by news organizations over the administration’s increasingly stringent photo policies.”

He added that McClatchy “rarely” uses the official White House photos. “But we think it’s important to take a stance that helps send the message that the limited access works against the public’s interests, diminishes the flow of information and often creates an inaccurate portraits of events in the White House.”

Gyllenhaal added that “the only exception” to the new rule is “national security reasons” when the press can’t be present.

“The only exception would be when access by a news photographer is not possible for national security reasons, such as the recent photo of White House staff members gathered during the bin Laden raid. While instances like these are rare, the editors will consider exceptions on a case-by-case basis. As it is, McClatchy-Tribune Information Services does not move White House photos handouts.”

Likewise, on Nov. 24, USA Today said it’s not going to use White House Press Office photos. The paper’s Deputy Director of Multimedia Andrew P. Scott sent an e-mail out saying it only will use handouts under “very extraordinary circumstances.” He wrote, (full e-mail on Poynter)

“We do not publish, either in print or online, handout photos originating from the White House Press Office, except in very extraordinary circumstances. In those very rare instances where a handout image from the White House image has been made under legitimate national security restrictions and is also of very high news value, the use needs to be approved in advance…”

Also on the 24th, the Tacoma, Washington News Tribune said it also won’t be using “official pictures.” In a column, the paper’s executive editor Karen Peterson wrote that the policy holds “even if that means going without a photo.”

“Since Obama took office,” Peterson said that the newspaper has published 10 official photos. “Two were taken in 2009 of the Obamas’ new puppy, Bo, but the others were of news events.”