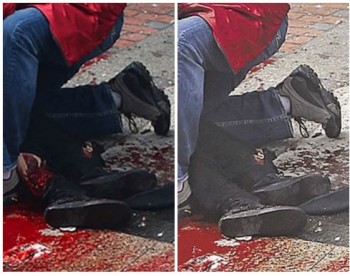 While so far, iMediaEthics has seen many people wary of spreading possible misinformation related to the Boston Marathon bomb explosions, so far there have been a few noteworthy errors and ethical fails.

Too Graphic an Image? No problem for the Daily News, which Photoshopped It Out

The image showed a woman sitting in the foreground, another woman injured and lying down in the background with a man helping. But the real image of the photo, published on the Boston Globe’s website, showed that the woman in the background’s leg had been hit, showing lots of blood and what appeared to be a torn ankle.

The New York Daily News’ front page appeared to have been Photoshopped to remove a gory injury to the woman in the background’s ankle. (Credit: Newseum, screenshot)

“If you can’t stomach the gore, don’t run the photo. Period,” Apple advised, pointing to a similar Photoshop job last year in the South African Citizen’s newspaper. As iMediaEthics wrote at the time, the Citizen Photoshopped an image on its front page of a suicide bomb attack in Afghanistan. While the Citizen said it intended to blur two dead bodies in the photo, it ended up removing them from the image. The Citizen apologized for the Photoshop job, calling it “completely inexcusable.”

iMediaEthics has written to The Daily News asking for confirmation it Photoshopped, why it Photoshopped and if it disclosed this to readers. We’ll update with any response.

AP Wrong about Cell Phone Service after Boston Marathon? Report Rowed Back after an hour

The Associated Press rowed back its reporting on the explosions at the Boston Marathon.

In a 4:55 PM EDT report, the AP’s Eileen Sullivan reported, based on an anonymous source, that cell phone service was being cut, writing:

“A law enforcement official says cellphone service has been shut down in the Boston area to prevent any potential remote detonations of explosives.”

“A law enforcement official, citing an intelligence briefing, said cellphone service had been shut down Monday in the Boston area to prevent any potential remote detonations of explosives.

“But officials with Verizon Wireless and Sprint Nextel said there had been no such requests.”

The New York Post’s coverage of the attack has differed from many media outlets in two major ways — the death toll and  the identification of a suspect.

By 5 PM ET the day of the marathon, The New York Post was reporting that there were “12 dead” in the attack and the police had IDed a suspect.  But, only three people have been confirmed dead and the authorities have still denied having any suspect in custody.

“The official death toll remained at three, but a law-enforcement source told The Post it could be as high as 12.”

The Washington Post’s Erik Wemple suggested either The New York Post’s source “knows far more than the FBI, the Massachusetts governor, the Boston mayor and everyone else who has gone on record,” or the Post is flat “wrong.”

‘A Suspect under Guard’?

In another April 15 report, the New York Post claimed unnamed “law enforcement sources” said that there’s “a suspect — a Saudi Arabian national” who is 20 years old “under guard at an undisclosed Boston hospital.” However, authorities repeatedly said there weren’t any suspects in custody.  At an April 15, 6 PM ET press conference, Boston Police Commissioner Ed Davis said of reports about a suspect in custody, “Those reports are not true…There is nobody in custody.”

The Post’s homepage April 15 at 5:14 PM ET actually contained three errors related to the explosions: the report about cell phone service, the death count and the suspect story.  Check out an image below.

By 5:26 PM ET, The Post’s homepage expanded on the initial report about a suspect.  The Post was reporting: “Authorities ID suspect as Saudi national in marathon bombings, under guard at Boston hospital.”

The authorities’ denial of a suspect was reiterated in an April 16, 10:06 AM ET tweet from the Boston Police Department that said “no one in custody.” Gawker noted that the Post finally dropped the story about the 20-year-old being a suspect with an April 16, 10:29 AM ET story saying he was “ruled out…as a suspect.” That report was also based on anonymous “law-enforcement sources.”