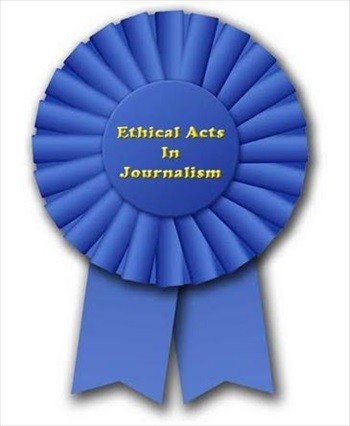 Journalism awards are traditionally given for news stories, commentary and design. What makes the annual iMediaEthics’ Ethical Acts in Journalism Awards different is the recognition of ethical actions behind the scenes by editors and media administrative employees. iMediaEthics wants the public and media professionals to learn about individuals whose decisions promoted ethical behavior in their own organizations as well as in the overall journalism profession.

iMediaEthics wants to honor the following individuals and news outlets for particular ethical actions we experienced from the beginning of 2012 through the end of 2013. We hope the thoughtful, sometimes couragous, decisions that occurred within the media outlets listed below will help you feel, as we do, that media outlets do care about ethical conduct and that individuals within companies will step up, and even fight to maintain it.

Congratulation to all winners!  And thank you.

When iMediaEthics contacted The Miami Herald and The Charlotte Observer in 2012 to tell them that their owner, McClatchy, had corrected errors in their reporting about WikiLeaks’ founder Julian Assange in their archive versions but failed to let their newspapers know so that they could do corrections on their websites, both The Miami Herald’s Metro Editor, Jay Ducassi, and The Charlotte Observer’s Editor/Vice President, News, Rick Thames, took action. Without hesitation or fear, these men immediately stated for publication that McClatchy should not have corrected their stories without informing them and made speedy corrections. Julian Assange had reached out to iMediaEthics in 2012 about getting corrections where the media falsely stated he was “charged with a sex crime” in Sweden instead of only “accused”– a significant difference that had an unfair negative impact on his reputation and WikiLeaks’ fundraising.

Ducassi, who was at the Herald for more than 25 years, between 1981 and 2013, and Thames, nine years with the Observer, are both given an Ethical Acts in Journalism Award for their editorial leadership that led to concern, care and quick high-profile corrections about Julian Assange.

Miranda Walker, Confidential Secretary, in the top administrative office at The New York Daily News was contacted by iMediaEthics about our getting no response in the advertising department regarding the need for proper labeling of certain ongoing advertorials published by the Daily News. Walker obviously took action and worked behind the scenes after our complaints (we can not say nor do we know how; she only told us she would look into the problem and sounded concerned). See Gif below. It shows an example of a Daily News ad that had no label to distinguish it from news, a violation of FTC rules, which is later slapped with a bold font “Advertisement” label. Because she dealt with it and the problems were solved, iMediaEthics never reported what would have been several negative stories about the Daily News. So we have no story to link to.

Walker, with the Daily News for 14 years, is given an Ethical Acts in Journalism Award for dedication to her newspaper and actions taken so Daily News readers recognize the vital difference between advertising and editorial content in the recurring ads we flagged to her.

When iMediaEthics interns contact newspaper journalists about errors, the reception, more often than not, is chilly and sometimes rude. It’s a hard sell to teach interns that journalists care about ethics in the face of such sour and defensive behavior. Then there is Flora Peir, Assistant Metro Editor of The New York Times, who saves the day. She was a perfect example of how a journalist can be confronted with errors by a young person and then act with professionalism, kindness and even provide encouragement for the intern’s project. Read the intern’s story here.

So for her dedication in the face of an iMediaEthics’ intern’s emails and calls, with what is for many, galling criticism from a young person, and for her actions as a role model showing editorial transparency, sensitivity and care to a young journalist’s inquiries, Peir, working at the newspaper for ten years, earns an Ethical Acts in Journalism Award.

iMediaEthics has never been to the Time Warner Cable legal offices, but we expect that there’s a sign that reads “The Buck Stops Here” above its doors. Marc Lawrence-Apfelbaum, at TWC for 24 years, and his colleague Michael Quinn, working at TWC since 2001 and Time Warner Inc since 1999, have impressed us over the years with their responses to ethical issues that iMediaEthics has raised. In 2013, a racy infomercial titled “Best Sex Ever” that appeared to be editorial content was being aired via Time Warner Cable, along with cartoons on a Sunday morning, concerning to iMediaEthics and in direct violation of FCC rules that protect children. Read story here.

iMediaEthics knows problems will always arise in real life–the key is how people respond to fixing them. Lawrence-Apfelbaum, Executive Vice President, General Counsel and Secretary,  and Quinn, Vice President and Assistant Chief Counsel, Litigation, at Time Warner Cable set perfect examples in 2013. When informed of the faulty airing times in this case, they were professional, polite and showed concern as they took quick and responsible actions that included following up when not all cable stations immediately complied with correct scheduling times. In iMediaEthics view, these men should be recognized for their consistent “buck stops here” commitment to executing and maintaining ethical standards at TWC and specifically, their acts in 2013 when responding to iMediaEthics’ notification about the “Best Sex Ever” infomercial’s errant broadcast times.

So, for their continuing unambiguous concern in dealing with informercials that need to be clearly labeled as such and, more specifically in 2013, their no-excuse-type actions to fix faulty broadcast timing, Quinn and Lawrence-Apfelbaum both earn an Ethical Acts in Journalism Award.

Many thanks again to all winners and congratulations from everyone at iMediaEthics.