60 Minutes Corrects Benghazi Story on Air, Calls it 'A Mistake' but Fails t 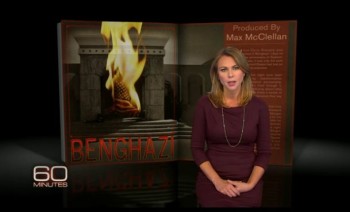 CBS News’s Lara Logan read a “correction” to be aired on tonight’s 60 Minutes admitting again that CBS News was “misled” by source Dylan Davies in its report on Benghazi.

Tonight’s correction, posted online and found by the Huffington Post , hasn’t even aired on 60 Minutes broadcast yet.  It reads in part:

“In this story, a security officer working for the State Department, Dylan Davies, told us he went to the compound during the attack and detailed his role that night.

“After our report aired, questions arose about whether his account was true. When an incident report surfaced, it told a different story about what he did the night of the attack. Davies denied having anything to do with that incident report and insisted the story he told us was not only accurate, it was the same story he told the FBI when they interviewed him. On Thursday night, when we discovered the account he gave the FBI was different than what he told us we realized we had been misled and it was a mistake to include him in our report. For that, we are very sorry.

“The most important thing for every person at 60 Minutes is the truth. And the truth is, we made a mistake.”

See video of the correction below.

As iMediaEthics has previously reported, CBS News 60 Minutes correspondent Logan already apologized Friday and admitted that the program was “misled” by a deceptive source, Dylan Davies.

Davies, under the pseudonym Morgan Jones, told Logan that he saw the attack at Benghazi.

Logan said in an interview with CBS This Morning that the final straw was the news that he told the FBI he wasn’t at the compound. “He told the FBI a different story from what he told us,” she said on CBS’ This Morning. “That’s when we realized that we no longer had confidence in our source, and that we were wrong to put him on air, and we apologize to our viewers.”

Before the 60 Minutes correction aired, New York Times media reporter Brian Stelter tweeted that the apology would be at the end of the program.

Jeff Fager, CBS News chairman and 60 Minutes executive producer, previously called the story a “mistake” in an interview with Variety. Davies’ book, The Embassy House, which was  published by a CBS-owned publisher, Threshold Editions, was “withdrawn from publication and sale,” according to a statement the publisher gave Media Matters.