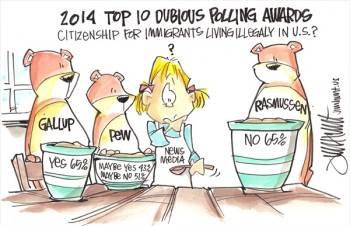 (Cartoon by Jim Hunt for iMediaEthics)

Editor’s Note: iMediaEthics’ polling director David Moore collects the ten most dubious polls from the prior year in his annual Dubious Polling Awards.

10.  Goldilocks and Three Bears Award – to Pew, Gallup and Rasmussen 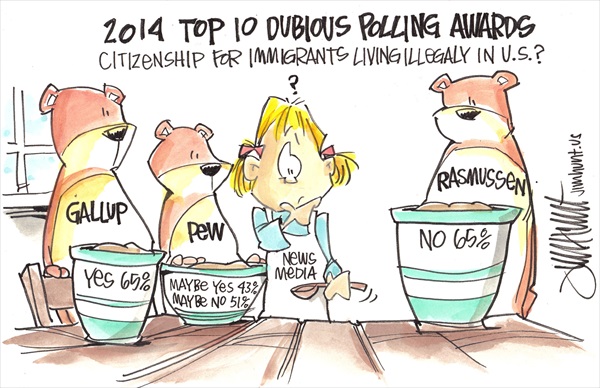 (Cartoon by Jim Hunt for iMediaEthics)

Like Goldilocks tasting the porridge – one that was too hot, another too cold, and the third just right – Pew, Gallup and Rasmussen have provided us with three quite different views of the public on immigration reform. Should there be a new law that would give a chance to immigrants, currently living in the United States illegally, to apply for U.S. citizenship?

Of course, different questions provide different results. But do upwards of 80% of Americans really have a meaningful opinion on the issue as Rasmussen, Gallup and Pew indicate? An iMediaEthics poll suggests not – anywhere from a third to half the public is unengaged, with the rest either evenly divided or leaning slightly toward citizenship.

A Fairleigh Dickinson poll last year apparently scared the daylights out of Talking Points Memo (TPM). The poll reported that 29% of voters agreed with the statement that “In the next few years, an armed revolution might be necessary to protect our liberties.”

TPM called the results “staggering” and noted that they “serve as a reminder that Americans’ deeply held beliefs about gun rights have a tendency to cross over into outright conspiracy theories about a nefarious government seeking to trample their constitutional rights – paranoia that pro-gun groups like the National Rifle Association have at times helped stoke.”

Relax, people! Poll respondents agree to statements like that for all sorts of reasons, often because it’s a way to express frustration without having to really do anything. Besides, the question doesn’t specify who the revolution will be against – Government? Corporations? Gun owners?

If we believed literally in what the polls tell us, we’d become basket cases.

8.   The Shoot First and Ask Questions Later Award – to the Quinnipiac Poll

What’s the difference between self-defense and the Stand Your Ground (SYG) laws passed in Florida and elsewhere?

Well, as the Orlando Sentinel notes, self-defense “has always been an acceptable reason for police and prosecutors to dismiss charges or not bring any in the first place.” But SYG laws?

As documented by the Tampa Bay Times, unlike self-defense, Florida’s new SYG law “provides cover to all manner of wrongdoers…people who went looking for a fight, killed unarmed people, even chased down their victims.”

So, do Americans support that type of SYG law? Quinnipiac says yes, by a margin of 53% to 40%.

But wait! A close examination of the question suggests Quinnipiac didn’t really ask about what SYG laws allow, but instead asked about self-defense, then interpreted the results of the self-defense question as support for SYG.

Maybe next time, given the complexity of the issue, Quinnipiac might devote more than one question to it, to see if Americans really do support a law allowing someone to shoot a person who is walking away. Or who does not initiate any conflict.  Or who is unarmed and simply making a lot of noise.

I suspect the results would reveal a different public from that described by Quinnipiac.

It’s a truism of American politics that, when polled, most Americans say they want to cut government spending overall. At the same time, when asked about specific programs, most Americans want to increase, rather than cut, spending. That “classic contradiction” makes it possible for politicians to rant against “government spending,” but still not find a consensus as to what programs they should cut.

Still, the story went on to report that by a 2-to-1 margin, Americans support across-the-board spending cuts, but by almost the same margin Americans oppose cutting defense spending! The conclusion: Americans weren’t too bothered by the sequester cuts for most programs, but were worried about cuts to the military.

No doubt that made the Pentagon feel pretty good, but it’s not clear why ABC and the Post were shilling for the Defense Department. Had they cherry picked almost any other program, they could have made the same case.

The question the poll asked was “Which of the following do you think best describes how Obamacare is being carried out and implemented?” You might think there could be a wide variety of answers, but the poll allowed respondents to choose from only two: “It’s going fine,” or “it’s a joke.”

As a way to manipulate what passes for public opinion, this question is a gem. How could anyone who gave even a scintilla of attention to the news during that period say the rollout was going “fine”? No one in the White House would have said that, nor would have any members of Congress – including Democrats. So, does that mean that everyone else thought the rollout was a “joke”?

Well, as Eliza Doolittle exclaimed when asked if she was going to walk across the park, “Not bloody likely!” But the contrivance that 60% of the public thought the rollout was a joke was fun trash talk for pundits grasping for something…anything…to fill those 24 hours.

For years, we’ve witnessed Andrew Kohut’s creative interpretations of public opinion polls, his knack for giving them a twist that others don’t see. In perhaps his swan song appearance as Pew’s Director, last February he was on the News Hour with his latest poll showing high distrust of government. At one point, he asserted that the public is at the “boiling point” and that “something’s got to give somewhere along the line,” that “public patience is not endless.”

It turns out that this colorful interpretation of the poll is a bit, shall we say, poetic. “Boiling point” is, of course, in the eyes of the beholder, but let’s behold the actual numbers. The poll he cited shows a clear majority (58%) of Americans simply “frustrated” with the federal government, and another 20% “basically content.” Oh, yes…19% are “angry.”

Does that a boiling point make? Or does the poll at least indicate an increasingly angry mood?

Nope. The Pew trend shows that the percentage of people expressing anger has actually declined by seven points since 2011.

Hmm…so maybe another interpretation might be that the public’s temperature is actually “cooling down”? I wonder what Mr. Kohut would say to that…

4.    The Let’s Wait and See What Happens Award – to  Public Policy Polling

Most pollsters who conduct pre-election polls tend to release their results before the election – you know – so the public has a preview of what the election outcome might be.

But last September, PPP, a Democratic-leaning polling organization, conducted a pre-election poll in North Carolina district, discovered that the results were not as favorable to the Democrat as expected, and withheld the results from publication – only to release the poll results after the election, claiming they were right on target!

You’ve got to admire the chutzpah of a company admitting its political bias post hoc. And it suggests a new way for pollsters to improve their accuracy record. Don’t go on the record until after an election, and only then if the poll turns out to be accurate.

We’d have so much more confidence in polls that way, because we’d never hear about the times they were way off the mark.
3.    Pointing the Finger Award – to HuffPost Pollster, et. al.

One approach to explaining how pollsters can produce conflicting poll results was offered by HuffPost Pollster authors, when they addressed the problem of “Abortion Polling Yields Conflicting Views.” It wasn’t the pollsters’ fault. It was the public’s!

“Why the conflict? The lessons are not new,” HuffPost Pollster authors write. It’s because people feel  “confused” and “uncomfortable” with the issue. They cite Jon Cohen, the Washington Post’s polling director: “It’s not really about not believing polls, rather that polls can’t give simple answers when no simple answers [are] to be had.”

Hmm…Isn’t that true of virtually all public policy issues? Besides, who is asking the simple questions to get the simple answers? Certainly not the public.

2.    Having Their Cake and Eating It, Too Award – to Media Pollsters and Their Defenders

Recently, America’s media pollsters found themselves once again confronted with embarrassing poll results. This time it was about NSA snooping, with polls showing the public largely in favor of the snooping, and largely opposed, and somewhere in-between.

This is not good. Polls are supposed to be accurate predictors of public opinion – right? So how can they come to such contradictory conclusions?

The most tried and true explanation pollsters give is that many, if not most, Americans are unengaged on the issue. As Gallup’s Frank Newport wrote about the conflicting NSA polls,

“The key in all of this is that people don’t usually have fixed, ironclad attitudes toward many issues stored in some mental filing cabinet ready to be accessed by those who inquire.”

But if that’s true, how did all the pollsters find between 90% to 98% of Americans with meaningful opinions? Shouldn’t they have “discovered” that a significant portion of the public had an empty metal filing cabinet?

That’s the beauty of having one’s cake and eating it, too. What seems impossible is waved away with the illusion that these media polls are measuring public opinion. We should know better.

1.    The “Rolling Over in His Grave” Award – to Jim Clifton, President and CEO of the Gallup Organization

Reason: For giving the Gallup name a type of publicity that could wake the deceased founder.

In 2012, the Gallup Organization was sued by the Federal Government for bilking the government out of millions of dollars, and for violating the Procurement Integrity Act by agreeing to hire a federal employee only if he could first increase the size of a government contract for Gallup. That kind of behavior is considered a no-no, especially if Uncle Sam is involved.

Last July, the suit resulted in Gallup having to pay a $10.5 million fine for its transgressions, and – according to the Omaha World Herald – removed Clifton “from oversight of his company’s government contracting business as part of an agreement that will allow the company to continue doing business with the government.”

I’ve long admired Jim Clifton’s leadership of the Gallup Organization, where I worked from 1993 until 2006, as Managing Editor, then Senior Editor, of the Gallup Poll. Although he said I needed to part company with Gallup in 2006, when I notified him about my forthcoming book, How To Steal An Election, I praised him in my 2008 book, The Opinion Makers, for resuscitating the Gallup name. So, it’s especially ironic that after such success in reviving the Gallup brand, Clifton should be the one to tarnish it so profoundly.