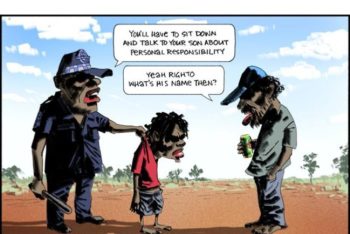 Last month, more than 700 readers complained after The Australian newspaper, a daily newspaper based in Sydney, published an editorial cartoon depicting Aboriginal people. The cartoon showed a policeman telling a man to “talk to your son about personal responsibility” and the man responding asking what the son’s name is.

Instead of issuing a ruling on whether the cartoon was OK, the Australian Press Council suggested that to resolve the complaints and concerns about the cartoon, The Australian publish two op-ed pieces “providing Indigenous perspectives on the cartoon and shedding light on the underlying issues.”

The Australian’s managing editor Helen Trinca told iMediaEthics by e-mail, “we welcome the Press Council decision to recognise how fundamental free speech is to our society.”

Both groups publicly slammed the cartoon at the time of publication, with the NSW Aboriginal Land Council calling it racist and the SNAICC labeling the cartoon “disgusting, disrespectful and hurtful” as well as “clearly racist.”

“With the agreement by The Australian to publish these items prominently, we believe that the complaints have been effectively resolved through an appropriate remedy, and no further action will be taken by the Press Council,” the council’s chair David Weisbrot wrote in a news announcement.

While many readers clearly complained about the cartoon, Weisbrot wrote that others did defend the cartoon, pointing to free speech. “In light of the powerful public interest in a free and vigorous press, great deference is given to expressions of political opinion,” he wrote. “Longstanding tradition dictates that satire and cartooning should be afforded even greater latitude, which is why the ‘Je suis Charlie’ campaign, which started after a terrorist attack in Paris killed a number of journalists and cartoonists, resonated so powerfully around the world.”

The press council pointed iMediaEthics to Weisbrot’s statement for its comments on the matter.

The Australian is owned by News Corp. Australia.