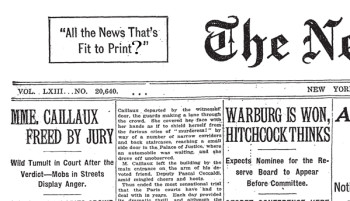 In compiling our year-end corrections round-up, we realized many of our favorites this year came from the newspaper of record.

Below, we’ve collected eight of the more unusual or entertaining errors corrected by the New York Times in 2014.

This September, the Times called Dick Cheney the former president of the United States.

Of course, he was not the president, instead serving a vice president to George W. Bush. That correction:

“An earlier version of a summary with this article misstated the former title of Dick Cheney. He was vice president, not president.”

7. Welcome to Good Burger, Home of the Good Burger — not an everyday teen [link]

In November, the Times confused Kel Mitchell of Nickelodeon’s Kenan & Kel, with a regular-old teenager working a real job at a fast-food restaurant.

A picture of Mitchell — from the 1997 movie Good Burger — was used in the Times‘ report on “Alex from Target,” a teenager in Texas whose photo went viral.

“An article on Thursday about the latest Internet sensation of ‘Alex from Target,’ a picture of a teenager bagging merchandise at the retailer that went viral online, described incorrectly a subsequent Internet posting of ‘Kel from Good Burger.’ It was a frame from the 1997 film ‘Good Burger’ starring the actor Kel Mitchell; it was not a photograph of a teenager in a job.”

The New York Times issued a multi-part correction to a Nov. 18 report on recipes for Thanksgiving.

The article misspelled Columbia, contained incorrect information about a Delaware estate, didn’t tell readers how to prepare quince, showed a papaya instead of a pawpaw, and erred in a recipe for cranberry sauce and chilis.

“An article last Wednesday recommending a Thanksgiving dish from each state, with a recipe, contained numerous errors.

“The recipe from Connecticut, for quince with cipollini onions and bacon, omitted directions for preparing the quince. It should be peeled, cored and cut into 1-inch chunks. An illustration with the West Virginia recipe, for pawpaw pudding, depicted a papaya — not a pawpaw, which is correctly depicted above. The introduction to the recipe from Arizona, for cranberry sauce and chiles, misstated the origin of Hatch chiles. They are grown in New Mexico, not in Arizona.

“The introduction to the Delaware recipe, for du Pont turkey with truffled zucchini stuffing, referred incorrectly to several historical points about the Winterthur estate. It was an ancestral home of the du Pont family, not the sole one; it was established in 1837, not in 1810; the house was completed in 1839, not in 1837. The introduction also misstated the relationship of Pauline Foster du Pont to Eleuthère Irénée du Pont. Pauline was the wife of Mr. du Pont’s grandson, not his daughter-in-law.

“And, finally, the label for the illustration for the nation’s capital misspelled the District of Columbia as Colombia.”

Also in March, the Times corrected an article about Viktor F. Yanukovych, who was ousted as Ukraine’s president in February.

An earlier article said Yanukovych was trying to avoid being having his trial in Ukraine because it “would probably lead to his execution.”

But, as the Times corrected, Ukraine doesn’t have the death penalty, so perhaps Yanukovych can rest a little easier.

“An article on Wednesday about the unfinished Crimean palace of Viktor F. Yanukovych, the ousted president of Ukraine, referred imprecisely to his possible fate. While the new government in Kiev wants to put him on trial for mass murder, and many are calling for his execution, Ukraine does not now have the death penalty, so it is premature to say that a trial, if held in Ukraine, would ‘probably’ lead to his execution.”

The Times issued several corrections to its reporting on Michael Brown’s death, as iMediaEthics pointed out in August.
An Aug. 16 article on Wilson being identified as the officer who fatally shot Brown wrongly said how long Wilson was an officer and how long Wilson worked for a previous police department in Missouri.

“An article on Saturday about Michael Brown, the unarmed African-American teenager in Ferguson, Mo., who was killed by a police officer misstated, in some editions, the number of years that the officer, Darren Wilson, worked for the police department in Jennings, Mo., before joining the Ferguson force. It was two years, not four.”

“An earlier version of this article, relying on information from the Ferguson police, misstated the number of years that Mr. Wilson served as an officer in Ferguson. Subsequent information from a public record’s request showed that Mr. Wilson served with the department for almost three years, not four, giving him five years of experience as a police officer, not six.”

The Times also erred in its second correction by saying Brown was the police officer. IMediaEthics captured a screenshot and asked the Times for a correction. See below.

No correction for the correction appears on the article, but the error was scrubbed. See below a Dec. 8 screenshot showing that the correction has been changed without disclosure.

3. 12 Years a Slave Author Gets Oldest NYT Correction Ever [link]

After Oscar season this year, the Times went back to an 1853 story from its archives and finally corrected spelling errors in naming the author of 12 Years a Slave, Solomon Northup.

Times managing editor for standards Phil Corbett told iMediaEthics by e-mail at the time that “as far as we know this is the oldest error we’ve corrected” since the article was published “less than a year and a half after the Times was founded.”

2. The Church of Scientology did NOT kill Michael Brown [link]

The New York Times had egg on its face again in September. Thanks to an editing error, likely a poorly written sentence, the Times reported that the hacking group Anonymous protested the Church of Scientology for Brown’s death.

The original sentence read: “You can see this merging in the Guy Fawkes masks worn by members of Anonymous, a loose international network of hactivists, at protests against, for example, the Church of Scientology for the killing of Michael Brown in Ferguson, Mo.”

Perhaps the New York Times thought its Nov. 21 article “Fear of Kim Kardashian’s Derriere” would go viral. But the correction the Times added the next day got way more attenton.

The Times had reported Kanye West was upset that his wife Kim Kardashian got more attention for her butt than he did.

“My booty is like Michelangelo level, you feel me?” the Times reported West said. “It’s like a sculpture. It’s like something that should be sitting in a museum for thousands of thousands of years,” further adding that Kardashian’s bottom is “not at that level.”

The West quotes came from a satire article from the Daily Currant, which had claimed West made the booty remarks during an interview with a Chicago rap station WGYN.  There is no WGYN in Chicago, West never made the comments, and the Times fell for it all without any apparent fact checking.

“An earlier version of this column was published in error. That version included what purported to be an interview that Kanye West gave to a Chicago radio station in which he compared his own derrière to that of his wife, Kim Kardashian. Mr. West’s quotes were taken, without attribution, from the satirical website The Daily Currant. There is no radio station WGYN in Chicago; the interview was fictitious, and should not have been included in the column.”

Did we miss any funny or significant corrections?  Leave your favorites for the year in the comments section.