800 Complaints to the PCC, the Observer's Transgender Column 'Should Not Ha 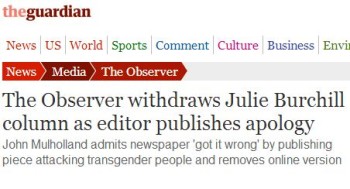 A controversial column on transgender people that ran in The Observer and was later removed from its website has led to an apology from the newspaper, a protest, hundreds of readers’ complaints and now a Press Complaints Commission investigation.

As The Observer’s sister paper The Guardian explained, Julie Burchill’s column, “Transsexuals should cut it out,” described transsexuals as “screaming mimis,” “bed-wetters in bad wigs,” and “dicks in chicks’ clothing.” While the column was unpublished from The Observer’s site, The Telegraph re-published it. Burchill’s column defends Suzanne Moore, whom she describes as a “brilliant writer” and “friend” over Moore’s “piece about women’s anger” in a book of essays. Burchill then goes on to criticize Moore’s critics, writing in part:

“Shims, shemales, whatever you’re calling yourselves these day — don’t threaten or bully we lowly natural-born women, I warn you.”

Reader responses to the column, published by The Observer, were largely negative, and on Jan. 17 “more than 100 transgender people and supporters” participated in a “peaceful protest…outside the Guardian Media Group offices,” according to The Guardian itself.

The Observer’s editor John Mulholland announced in a statement that The Observer “decided to withdraw” the column,  which he called “an attempt to explore contentious issues within what had become a highly-charged debate.” Mulholland said:

“On this occasion we got it wrong and in light of the hurt and offence caused I apologise and have made the decision to withdraw the piece. The Observer Readers’ Editor will report on these issues at greater length.”

Guardian media blogger Roy Greenslade argued Jan. 16 that while he wasn’t “entirely happy about the original content” and its “generalised attack on a minority,” The Observer shouldn’t have unpublished the column and instead should have better “edited” it, as Burchill’s job is to “provoke controversy.”

In a separate post, Greenslade reported that the UK Press Complaints Commission said it would look into this case.   iMediaEthics asked the PCC for more information about the number of complaints, what the investigation will include and any timeline for the investigation. The PCC’s Director of Communications Jonathan Collett told iMediaEthics by email Jan. 21:

“We have received over 800 complaints and we will now consider them. We aim to deal with all complaints as quickly as possible.”

Outside of those complaints, Observer readers’ editor Stephen Pritchard told iMediaEthics by email that Burchill’s column “engendered 1,000 emails to me” and “3,000 comments online.”

“We have had large protests before, but these figures are testament to the ever-growing power of the internet and social media,” he added.

In a readers’ editor column, Pritchard weighed in on Burchill’s column and controversy as well and referenced the paper’s “own editorial code” advising against “words that are likely to offend” and the national Editor’s Code against “prejudicial or pejorative reference  to an individual’s race, colour, religion, gender, sexual orientation or to any physical or mental illness or disability.”

According to Pritchard, The Observer editor who called for the column’s unpublishing, John Mulholland, explained of the column:

“This clearly fell outside what we might consider reasonable. The piece should not have been published in that form. I don’t want the Observer to be conducting debates on those terms or with that language. It was offensive, needlessly. We made a misjudgment and we apologise for that.”

Pritchard told iMediaEthics by email that the newspaper did notify Burchill it would be taking her article down before doing so.  In response to our inquiry if this incident will affect her relationship with the paper, Pritchard wrote:

“Ms Burchill is a freelance contributor to several newspapers in Britain. The editor tells me: ‘At this moment we have no plans to commission her.’  The paper breached its existing guidelines, so they need to be underlined.  Additionally, it has opened a dialogue with  representatives of trans groups.”

iMediaEthics sent the following questions to Burchill’s representatives and will update with any responses: