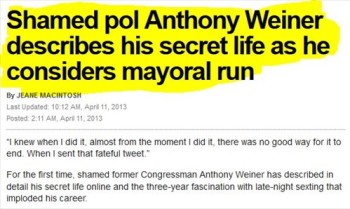 Why do an exclusive interview for your front-page if you can just steal it from another newspaper? That’s what the New York Post did with the New York Times‘ interview of former U.S. congressman and possible NYC mayoral candidate Anthony Weiner.

Just a day after the New York Times Magazine posted an exclusive 8,285-word profile of Anthony Weiner and his wife Huma Abedin on its website, the New York Post hijacked the Times’ exclusive for its own cover story.

The New York Times did the work to score a coup with a cover story profile of Anthony Weiner and Huma Abedin (on right), but The Post copied and pasted almost 1,600 words from the Times’ interview to make its own cover story. (Credit: Newseum and NYTimes.com)

The Post’s story, “Shamed pol Anthony Weiner describes his secret life as he considers mayoral run,” is 1,894 words long.  Of that total, 1,538 of those words were verbatim quotes from the Times.  Only one time — in the third paragraph  — did the Post credit the Times’ interview in its article.

# of Words in NY Times’ Article

82 % of NYPost Article that came
From The Times

Basically, the Post’s story consisted of quotes from the Times’ article with a few Post-written introductory comments.  In the image found lower on this page, see The New York Post’s article in a word document. iMediaEthics highlighted quotes that came from The New York Times.

Is this fair use?

Jonathan Van Meter, “a contributing editor at Vogue and New York magazine” wrote the report for the New York Times Magazine but was unable to comment to iMediaEthics about New York Post’s helping themselves to 1,538 words that he assembled from more than a dozen hours of interviews with Weiner and Abedin.

“I transcribed 15 or 16 hours of tapes” to produce the cover story, Van Meter said in a Q & A with Times’ blog “The 6th Floor, Eaves Dropping on the Times.”  In an April 15 post for that blog The New York Times’ Rachel Nolan offered a behind-the-scenes look at Van Meter’s story. Sad to say, that Q & A did not address the obvious theft.

Van Meter is quoted in Nolan’s Blog Q&A as spending “a lot of time” on his long-form interviews . “It’s almost like a competitive sport now: journalists trying to outdo one another in terms of who can spend the most time.” Apparently, the New York Post was the bully who ate his lunch. Posting the Sunday NY Times Magazine story online Wednesday allowed the NY Post to scoop the Times with its own profile on Thursday in print and online. Jonathan Van Meter, the real author, disappears. Instead of hours of interviews, it took Post reporter MacIntosh only minutes to copy, paste and score the byline.

In addition to writing to Van Meter, who’s mum, multiple people at the New York Times communications and legal departments are also tight-lipped and avoiding iMediaEthics’ requests for comment. We asked what the New York Times plans to do about the Post rip off. We’ve also reached out to Post reporter MacIntosh and the Post’s public relations representative. We’ll update with any responses.

(CLICK IMAGE TO ENLARGE) The yellow highlighted text illustrates the almost 1,600 words copied and pasted from the Times in the The New York Post’s April 11, front-page story.

What Do Experts Say?

“Traditional guidelines for attribution” and in the age of the Internet are a “brave new world,” Irby told iMediaEthics by phone. Even further, “traditional expectations of professioanlism are being blurred,” he said.

But, the key issue here is whether there is “clear attribution,” he said.  Providing only a “blanket acknowledgement to The Times” doesn’t credit “a journalist that actually did the work,” Irby commented, but The Post “met the minimal obligation.”

“I applaud a media effort such as yours to create a discussion,” Irby added.

Irby raised a number of questions to consider when addressing this type of issue.  For example, “we don’t know if they [The Post] called the Times in advance to get permission,” or if The Post’s story helped “extend brand and media visibility” for The Times.

“Is the Times getting more bang for the buck by extension of their brand? Then it is clearly beneficial to them.”

But, ultimately, “It’s up to the copyright holder if they want to challenge it or not,” Irby said.

A Legal Point of View

Copyright lawyer and journalist Alan Behr told iMediaEthics that, technically, this is a tricky case.  Since the Post took the Times’ quotations — and not Times writing, it’s not so cut and dried to say the Times owns copyright.

“Because Weiner spoke the words, only he owns them, but he can hardly complain about their publication because he spoke them (albeit to someone else) to be published in a piece written about him and not by him,” Behr told iMediaEthics.

The Times could argue that the Post infringed by removing potential income or page views, or the Post could claim fair use, Behr told iMediaEthics.  The Times could support any potential case with page view counts before and after the Post‘s report, he said.

Behr explained, ” What the New York Post published is a summary of the Weiner story that appeared in The New York Times Magazine, putting his quotations from that longer piece into a kind of interview format and giving The New York Times appropriate attribution.” However, the Times has some legal options:

Behr wrote: “It is possible that doing” what the Post did “could be deemed making an unauthorized derivative work of The New York Times Magazine article.

“That might be the case if the order of the quotations–and the structure of the piece–closely follows that of The New York Times Magazine story and if the Times can prove that the summary in the Post has effectively taken away sales of its own story. In that event, the Times might theoretically have a claim for copyright infringement for making an unauthorized derivative work in the form of an abridgement.

The Post might counter that it was not merely reporting on Weiner but was reporting on the reporting about Weiner; that the quotations are free for all to use; and that the use of those quotations constituted legally permissible ‘fair use’ under the Copyright Act.  It would be an interesting case to follow, to be sure.”

“I think that the correct first step,” Behr suggested, “should the editors of the Times feel that the use was inappropriate, would be for a senior editor at the Times to call his or her counterpart at the Post, then sit down for a meeting. These things are usually best discussed face to face in a quiet environment.  But if the Times simply does not care or believes that the Post‘s reporting actually supported and benefited the piece from its magazine, you could call it a win-win.”