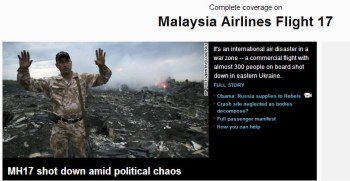 CNN is promoting at the top of its web page that its reporter “sees bodies” from the Malaysia Airlines plane crash. The flight, Malaysian Airlines flight 17, was headed from Amsterdam to Kuala Lumpur.

With 298 people killed when the airplane crashed yesterday in Ukraine, is it really worth the clicks shouting to readers that its reporter sees some of the bodies? Is it fair to the victims of the crash and their families?

iMediaEthics finds the news alert in bad taste. Do you agree?