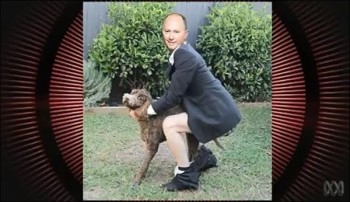 ABC’s The Hamster Decides, a late-night entertainment program showed an image of Kenny captioned “Chris ‘Dogf***er Kenny,” according to ABC. The picture showed Kenny “having sex with a dog while strangling it,”  the Sydney Morning Herald reported.

The Sept. 11 segment was in response to Kenny’s “calls for a reduction in funding for the ABC in his columns and television appearances,” according to the Sydney Morning Herald. Kenny is a columnist for News Limited’s The Australian and a host for Sky News Australia. His Australian blog describes him as a “commentator, author and former political adviser” with “an unashamedly rationalist approach to national affairs.”

See the segment below.

Kenny has claimed in his lawsuit that the segment was libelous because it suggested, the Sydney Morning Herald reported,

This past week, Australian Supreme Court justice Robert Beech-Jones ruled that Kenny could proceed with his lawsuit against the ABC.

Beech-Jones said March 5 that “there is little doubt the segment was distressing, even if not defamatory.” The court ruled that viewers didn’t really think he had sex with dogs, but otherwise he could move forward, the Guardian reported.

Beech-Jones added that the image is “likely to stay in the mind of the ordinary reasonable viewer long after the program has finished, whether it’s funny or not.”

Before suing, Kenny asked for an apology.  Kenny told iMediaEthics by e-mail:

“The ABC has refused to apologise so I have launched defamation proceedings against the abc to obtain an apology, costs and damages.

“I am grateful to all the people who have offered me private and public support, including my employers at The Australian and SkyNews, colleagues, competitors and members of the public.

“Most people understand that no media organisation, let alone a publicly funded one, should target its critics with this sort of offensive and vicious slur.”

ABC has defended the skit as part of a comedy program. It also argued that viewers understood that, based on the complaints it received over the program.

ABC looked into about 200 complaints at the time of the broadcast but dismissed them, an October Sydney Morning Herald article states.  ABC spokesperson Michael Millett told the Herald that the majority of the complaints were prompted by the news media’s coverage of the skit. Millet acknowledged the skit was “strong in nature” but that it was “consistent with” the program on which it was aired.

“This was confirmed by the fact that only one complaint was received in the 36 hours after broadcast,” he said to the Herald. “The other complaints – less than 200 in total – came after the issue was pursued by various newspaper columnists.”

“The ABC intends defending this matter given Judge Robert Beech-Jones has ruled out the first imputation and varied the remaining two imputations. No decision was made by Justice Beech-Jones on the merits of the case.

“The ABC believes it is on solid legal ground and has no choice but to defend the matter given the plaintiff’s decision to proceed with action.”

Kenny’s lawsuit is against ABC, host Andrew Hansen and production company Giant Dwarf, according to ABC.

iMediaEthics asked News Limited if it was involved with or backing Kenny’s legal action and if it had any comment on Kenny’s lawsuit.  News Limited’s Head of Corporate Affairs Stephen Browning declined to coment.