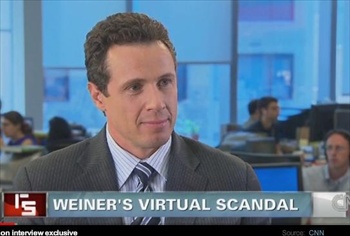 In an interview with Howard Kurtz on CNN’s Reliable Sources, ABC News’ Chris Cuomo defended his network’s decision to pay one of the women who engaged in online exchanges with Rep. Anthony Weiner, Meagan Broussard, Poynter’s Julie Moos reported.

In the interview, Kurtz questioned Cuomo on the newsworthiness of the information and interview and the money involved. Kurtz noted that conservative blogger Andrew Breitbart “brought Broussard’s name to ABC.” See here the transcript from June 12’s Reliable Sources.

Cuomo confirmed that ABC News paid Broussard for photos of her that she sent to Weiner — and not pictures of Weiner — and didn’t dispute that she was paid a figure of $10,000 to $15,000, which was reported last week.

Cuomo admitted the decision to pay Broussard was his decision and he could have stopped it, but didn’t because “it is the state of play right now. I wish it were not.” Cuomo suggested that if ABC News didn’t pay, another news outlet would and they’d lose the story. He said:

“I wish money was not in the game, but you know it’s going to go somewhere else. You know someone else is going to pay for the same things…I wish it were not. You do, too. But it is the state of play, and to say otherwise I think is false.

But, StinkyJournalism notes that one of the reasons news outlets are advised by ethics codes against paying for news or information is because it does create a culture of paying for news and bidding for news.  This “state of play” situation Cuomo references is exactly what media ethics guidelines seek to prevent.

As the Society of Professional Journalists’ code of ethics explains:

“Be wary of sources offering information for favors or money; avoid bidding for news.”

Last year, the SPJ’s ethics chairman at the time, Andy Schotz, commented to StinkyJournalism that not only does paying sources lead to “bidding wars,”  but also the news outlets’ credibility takes a hit.

And, as Poynter’s Julie Moos explained in a recent column, paying “licensing fees for stories…corrupts journalism.”

Poynter’s Julie Moos commented specifically about Cuomo’s comments, arguing that Cuomo’s “‘state of play’ defense argues that it’s justifiable to pay sources because the competition is paying them.”  StinkyJournalism wonders when it’s OK to do something largely viewed as unethical just because everyone else is doing it?

Plus, Moos questioned why ABC News cared about getting the photos that Broussard sent to Weiner.  She commented: “Anyone can send photos to a legislator, what matters to the public is how the legislator responds.”

The New York Times also reported on checkbook journalism this past weekend.  As the Times noted, ABC News has “the first-ever interview with Jaycee Lee Dugard,” which is scheduled to be aired next month.  Coincidentally (we think not), ABC News also shelled out a “six-figure sum for rights to home movies of Ms. Dugard” last year, according to the Times.”

The Times reported that CBS News’ chairman, Jeff Fager, criticized paying for stories and noted that it’s become an increasing demand.  “If you’re in the business of having to pay people to get a story, it can’t be worth it,” he is quoted as saying.